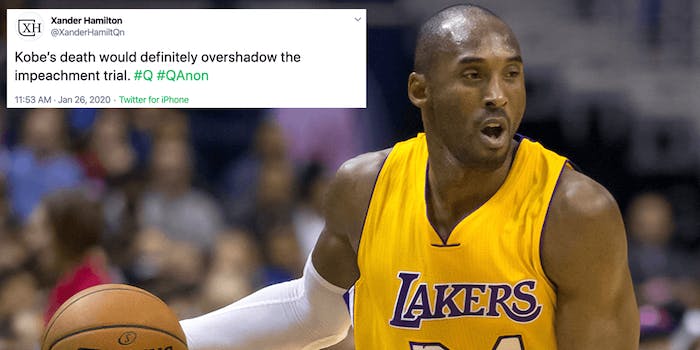 From Mr. Peanut to impeachment, QAnon supporters have their own theories regarding the basketball legend's death.

Conspiracy theorists immediately took advantage of Kobe Bryant’s death on Sunday after the legendary basketball star was involved in a helicopter crash.

The 41-year-old and eight others passed away, TMZ reported, after an accident involving the athlete’s private helicopter in the California city of Calabasas.

While sports fans mourned Bryant’s passing, conspiracy theorists online latched onto the tragedy as proof of their distorted beliefs.

The group, which has been tied to numerous instances of violence and deemed a potential domestic terror threat by the FBI, has even suggested that Bryant’s death may have been intentional in an effort to distract the public from the impeachment trial against the president.

Following any high-profile death, Q believers often suggest that the deceased may have been silenced for preparing to reveal secret information detrimental to the president’s enemies.

“AND what did Kobe know?” @ImADarkNight asked. “Just a thought. Maybe nothing. Very sad though.”

AND what did Kobe know? Just a thought. Maybe nothing. Very sad though. #Q #qanon #anon #anons https://t.co/zTUmC1n1Pr

Jordan Sather, one of the conspiracies’ most vocal believers, also insinuated that Bryant’s death was unlikely to be an accident.

“Kobe will now be all the news networks talk about for the next week,” Sather said. “It’s almost as if someone wanted it that way…”

The conspiracy theorist also went on to falsely claim that “70%” of all reported helicopter and plane crashes weren’t accidental.

Numerous accounts also highlighted several interactions Bryant had had with former President Bill Clinton, adding that the former politician may have been responsible.

“Mess with the devil and you’ll get taken out,” Twitter user @jaimerockstar said.

What are the odds for Kobe Bryant being clintonized? https://t.co/4nJ4icUeJb

Showcasing just how desperately QAnon believers will reach to tie in any and every insignificant event to their conspiracy, many also began pointing to a years-old car commercial featuring Bryant.

In the ad, the basketball player is seen driving a vehicle with a child dressed in a peanut costume. Food company Planters announced last week that it had killed off their iconic mascot Mr. Peanut. Therefore, the conspiracists claim, Bryant’s death was no accident.

Mr. Peanut decode. Kobe w/ little boy dressed as a peanut. Watch the video. "Catch us if you can" playing in the background. A taunt at the white hats. #WWG1WGA #QAnon #QArmy https://t.co/pFEFHnwzFt

Kobe just died….and guess what: it was predicted in a toon: helicrash. And mr. peanut funeral circulated on Twitter. Guess what!? He was in a peanut commercial! No coincidences!