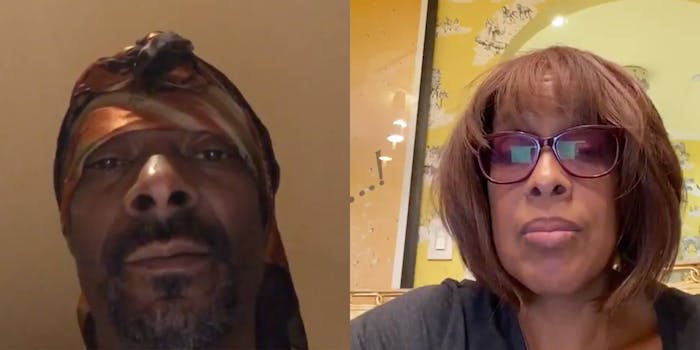 'Don't you hang out with Oprah? Why you attack us? We're your people.'

Snoop Dogg isn’t letting up on his criticism of CBS This Morning host Gayle King.

As Rap-Up reports, the rapper unleashed criticism in an Instagram video about King’s conversation with former WNBA player Lisa Leslie. During the interview, King brought up the 2003 rape accusations against Kobe Bryant.

In a widely circulated clip from CBS This Morning, King asks Leslie if Bryant’s “legacy is complicated” by the sexual assault case, in which charges were later dropped.

.@WNBA legend @LisaLeslie told @GayleKing that Kobe Bryant's legacy is "not complicated" for her despite his 2003 rape accusation.

"I don't think it's something that we should keep hanging over his legacy." https://t.co/qj6MVvOaqX pic.twitter.com/9qtVORobLO

“It’s not complicated for me at all,” Leslie says. She goes on to say she never saw Bryant as someone who would “do something to violate a woman or be aggressive in that way.”

King proceeds to question Leslie’s perspective as a friend of Bryant’s and questions if the sexual assault case has become part of Bryant’s “history.” King’s response evoked intense backlash online.

#GayleKing Thank you, Lisa Leslie for reminding Gayle King who your friend Kobe was/is to you! Gayle King, you are out of line, disrespectful, and wrong on all levels! It’s sad a former WNBA star had to teach you media etiquette 🤦🏾‍♂️ pic.twitter.com/2ZPNSicxcP

Gayle King really tryna push that sex offender narrative on Kobe while he is no longer here to defend himself? Lol she and Oprah will NEVER pass up the opportunity to tarnish a black man's name… Why the fuck she ain't interviewing ppl about Harvey Weinstein? Lol

In an Instagram video posted on Wednesday night, Snoop questions why King hasn’t “come after” Harvey Weinstein, who is currently on trial for rape and sexual assault.

“We expect more from you Gayle,” Snoop says. “Don’t you hang out with Oprah? Why you attack us? We’re your people.”

Since the video, the rapper has used his Instagram to unleash further frustration at King. He posted photos of King with Weinstein, one with the reading “We waiting. Gayle. When is that interview gonna air?”

King responded to the criticism via Twitter early Thursday morning, saying the CBS clip was from a “wide-ranging interview” that was “taken out of context.”

“I wanted to get Lisa’s take on it as a friend who knew him well,” King said about why she brought up Bryant’s sexual assault accusation.

NBA players such as Isaiah Thomas and retired NBA player Matt Barnes echoed agreement in the comment section of Snoop’s video post. Other celebrities, including 50 Cent, have slammed King for her interview.

Despite the flood of pushback, some are defending King for doing her job as a reporter. Journalist Ernest Owens accused Snoop and other Black male celebrities for “engaging in misogynoir,” or abuse and harassment aimed at Black women.

I just watched five minutes of Gayle’s interview with Lisa Leslie. There was nothing disrespectful or wrong about what she asked. As a member of the media/press, it’s her responsibility to ask relevant (and sometimes difficult) questions, and she did that in the appropriate way. https://t.co/fMGd5QhH2E

Defending Snoop Dogg and other men engaging in misogynoir against Gayle King for being a journalist who discussed rape in an interview further proves the point that we live in a culture where Black women aren't allowed to have a voice or an opinion about anything.

In a second video, King said she normally doesn’t respond online to critiques, but she opted to be candid.

“I have been with Kobe Bryant on many social occasions,” King said. “He was very kind and very warm to me. I felt that we had a friendly relationship. I too am mourning his loss just like everybody else…the last thing I want to do is disparage him at this particular time.”