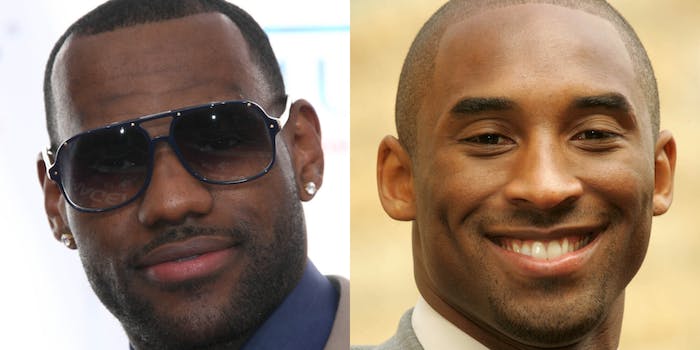 'The brotherhood and respect they had for each other...'

Many Lakers fans are still in shock following news of Kobe Bryant’s death—few more so than a fellow NBA icon.

James’ raw post came two days after Bryant’s death. In it, he noted that he wasn’t yet ready to face his sorrow but soldiered on anyway. “Man I sitting here trying to write something for this post but every time I try I begin crying again just thinking about you, niece Gigi and the friendship/bond/brotherhood we had,” James wrote alongside several pictures of the duo. “I literally just heard your voice Sunday morning before I left Philly to head back to LA. Didn’t think for one bit in a million years that would be the last conversation we’d have.”

Referring to Bryant as his “brother,” James went on to express his love for Bryant’s wife Vanessa and her three remaining children, the youngest of which is less than a year old. “I promise you I’ll continue your legacy man! You mean so much to us all here especially #LakerNation💜💛 and it’s my responsibility to put this shit on my back and keep it going,” James continued. “Please give me the strength from the heavens above and watch over me! I got US here! There’s so much more I want to say but just can’t right now because I can’t get through it! Until we meet again my brother!!”

The emotional post immediately tore at the heartstrings of fans, who took to social media to express their own grief. “LeBron’s IG on Kobe just took me out for the 6383736th time in the last 2 days,” Bleacher Report journalist Tyler Conway wrote.

Lebron’s IG post! The brotherhood and respect they had for each other… pic.twitter.com/isrxvPuw3T

A few fans shared footage from a 2009 ABC interview featuring James and Bryant. In it, the friends joke and compliment one another for their playing styles.

It was particularly devastating for some to see that James changed his Instagram profile picture to a photo of Bryant and Gianna.

Yet some people took to James’ post to condemn the 35-year-old for his “role” in Bryant’s death, throwing out absurd conspiracy theories.

Fans of both Bryant and James rushed to his defense. “Do y’all not have any sense of humanity,” one Twitter user asked. “This man just lost one of his idols and friend and you guys are blaming him for it? I honestly lost all hope for humanity.”

It’s so sad that on LeBron’s IG that people are accusing him of having something to do with Kobe’s death, like do y’all not have any sense of humanity? This man just lost one of his idols and friend and you guys are blaming him for it? I honestly lost all hope for humanity.

In the comment section for one of James’ earlier Instagram posts, several people did indeed accuse the Lakers star of somehow being related to Bryant’s death. Others shared wild and baseless conspiracy theories that the crash was “premeditated,” and accused James of being involved.

People on LeBron's IG can't even let him mourn in peace… disgusting pic.twitter.com/J2YrSixTv2

Hordes of commenters heaped on, accusing James of somehow having a role in Bryant’s death, making more absurd claims about how it was a “sacrifice” somehow tied to James’ NBA scoring record.

Saw those screenshots of LeBron’s IG comment section and that is truly amongst the most disgusting behavior i’ve ever seen on the internet. Those people should be ashamed of themselves.

The comments on Lebron’s IG post are just devastating. Social media doesn’t define how much you care about someone. Let the man grieve in peace! He is clearly mourning the lost of his friend but all y’all worried about is him posting about it grow tf up!

LeBron’s IG comment section is absolutely disgusting. People are blaming him for Kobe and his daughter’s deaths.

Bryant often chose to use a helicopter rather than ground vehicles for travel. Investigators are still in the process of determining the exact cause of the crash, but foggy conditions are assumed to be the culprit.