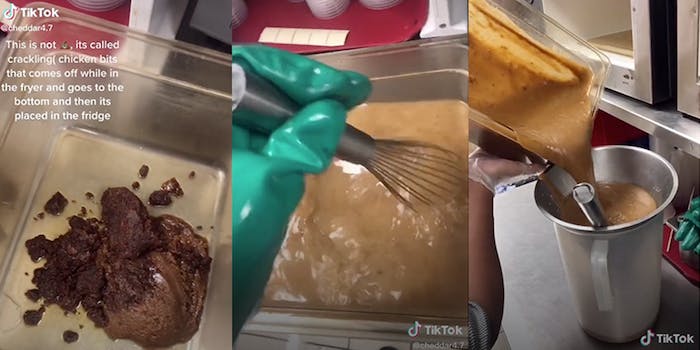 Viewers are divided on whether to be grossed out or impressed.

Between late-night McDonald’s hacks, Chick-fil-A’s secret menu leaks, and Taco Bell workers revealing the restaurant’s notorious bean recipe, KFC is now equally in the mix of fast-food TikTok hype. A viral video on TikTok shows how the fast-food chain’s classic chicken gravy recipe is actually prepared behind the scenes, and spectators are divided on whether to be grossed out or impressed.

“This is not poop, it’s called crackling (chicken bits that come off while in the fryer and goes to the bottom and then its placed in the fridge),” text reads over the video of the gravy being made. The trending clip uploaded by user @cheddar4.7 begins by zooming in on the crackling, kicking off a step-by-step gravy-making process.

After that’s gathered, warm water is poured on top of the leftover chicken pieces, breaking them up into a liquid substance, which the dry gravy mixture is poured into. Now, the worker is seen mixing it all up, and it begins to look more like the classic gravy viewers are probably familiar with.

From there, the mixture is heated for nine minutes, removed from heat, and mixed some more. The gravy then gets returned to the heat before finally being taken out for straining. Finally, it is labeled and distributed into KFC containers to be stored in warm cabinets for up to six hours, according to the video.

Despite several claims from users who stated they’d “never eat KFC gravy again,” others were satisfied by the effort, with one user commenting, “It’s nice to now actual chicken bits go into it rather than just some artificially flavored instant gravy lol.”

Another user also commended the gravy-making process. “This is so much better than I thought it was made,” they commented.