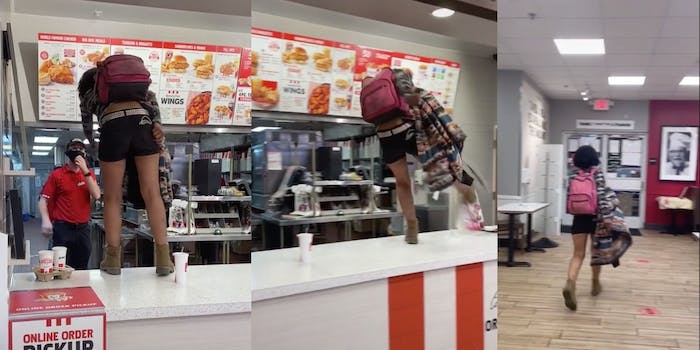 The hangry woman refused to wear a face mask but still wanted to be served.

A maskless woman got on the counter of a KFC and berated workers to give her food. They said they couldn’t do that unless she put on a mask.

“Call the fucking cops then bitch. Do it,” the woman says to the employee while yielding a cup in her hand as if she’s about to throw it at the worker behind the counter.

The woman proceeds to get on the counter, scream at the worker, and ball up both her fists.

“Give me something to fucking eat! I’m hungry!” the woman screams. “Now!”

She continues to inch closer to the person while perched on the counter and adds that they need to give her food “or call the fucking cops. Do it. Fuck you.”

In the second video, the masked employee she directed her words and threats at comes into view. She continues to demand food and specifically tells them to give her mashed potatoes and chicken.

“I can’t I’ll get fired,” the employee replies.

The woman then accuses him of not even working there, though the employee is clearly wearing a red KFC shirt and drive-thru-window headphones. The employee starts to apologize to the person on hold at the drive-thru when the woman kicks a display that was on the counter.

“I can’t give you anything to eat. … you have to wear a mask,” the employee, who has remained calm throughout her outburst, says.

The woman jumps on the counter and angrily walks away, still yelling. A masked customer who is waiting in line offers to give her a spare mask he has in his car, but she refuses, saying the restaurant is “disgusting.”

The incident, posted by TikTok user @leahmaechastain in two parts, has amassed nearly 100,000 views on the app. The first TikTok was posted with the caption: “dude wait for it.”

People online were infuriated by the woman and made jokes calling her Dora due to the backpack she had on the whole time. Others worried that she may have mental health issues.

Some pointed out that the employees shouldn’t have to deal with these situations.