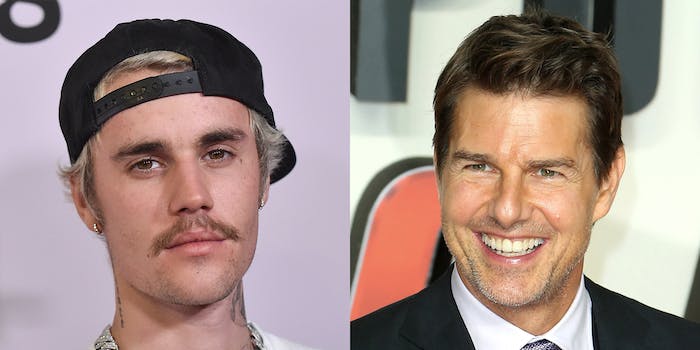 'I'm the Conor McGregor of entertainment.'

Justin Bieber completed an extensive tattoo cover-up for his new music video for “Anyone.” And in going shirtless and buff for the video, he reignited his “feud” with superstar actor Tom Cruise this week.

In a black-and-white Instagram snapshot from the shoot, the Canadian superstar wrote: “Tom Cruise is toast.”

Done in jest, his celebrity friends also chimed in, including Dwayne “the Rock” Johnson.

Bieber’s caption nods at a not-at-all-serious tweet, where he challenged the 58-year-old Cruise to a fight.

“I wanna challenge Tom Cruise to fight in the octagon,” he wrote back in 2019. “Tom, if you dont take this fight your [sic] scared and you will never live it down. Who is willing to put on the fight? @danawhite?”

But he told TMZ that he wasn’t serious.

“Nah… I was just playin’,” Bieber revealed to paparazzi photographers, while also noting he didn’t even know the Vanilla Sky actor. “It was just on my mind… I don’t know why. It was just a random tweet. I do that stuff sometimes. I’m pretty sure Tom would… probably whup my ass in a fight.”

However, a couple of months later also argued with James Corden on the Late Late Show about whether he would beat up Cruise. He claimed: “I’m the Conor McGregor of entertainment.”

The notion of a real fight apparently had legs at one point. In fact, TMZ’s Harvey Levin described a phone call with Bieber’s manager Scooter Braun, UFC President Dana White, and Endeavor CEO Ari Emanuel where Bieber would’ve taken the fight if Cruise was down to throw hands.

Bieber, who seems serious about boxing, also posted a video showing the “removal” of his tattoos for the “Anyone” shoot, as well as the finished product.

Below is the official video for “Anyone”: