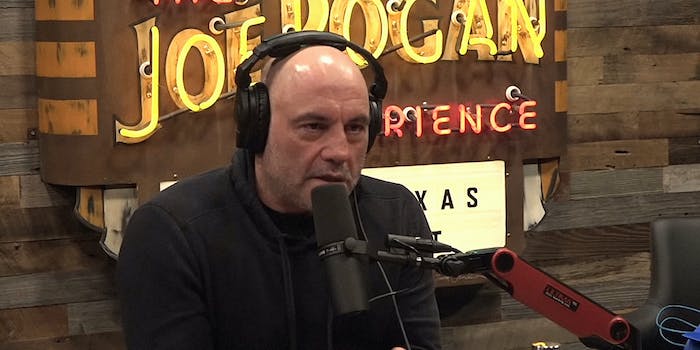 Rogan is also under fire for a joke where he compared Black people to 'Planet of the Apes.'

The controversy around Joe Rogan continues to snowball, as old clips resurfaced of him using the N-word, prompting Rogan to share an apology video on Saturday.

Meanwhile, Spotify has removed 113 episodes of Rogan’s podcast from the platform, and Spotify users are canceling their subscriptions in droves. Following in the footsteps of Neil Young and Joni Mitchell, numerous artists have also pulled their own material from Spotify, including Crosby, Stills & Nash, writer Roxane Gay, and singer India Arie—who shared a viral montage of Rogan repeatedly using the N-word.

In a letter to Spotify staff, CEO Daniel Ek said he “strongly” condemns Rogan’s use of racial slurs, while adding, “I do not believe that silencing Joe is the answer.” This attempt to find middle ground (and to retain Spotify’s most popular podcast) was not successful, as the backlash against Rogan just keeps spreading.

In his apology video on Instagram, Rogan expressed shame at having used the N-word repeatedly over 12 years of his show. He also stated that the viral montage took his words out of context. According to him, he used the N-word not as a slur, but in conversations discussing the work of Black comedians like Richard Pryor.

“I never used it to be racist, because I’m not racist,” he said. “But whenever you’re in a situation where you have to say ‘I’m not racist,’ you’ve fucked up, and I clearly have fucked up.”

However it was harder to explain away a joke where he compared visiting a Black neighborhood to being in Planet of the Apes. His explanation was that he was high at the time, he was trying to be funny, and he didn’t mean it in a racist way.

Dwayne Johnson is the most high-profile Rogan fan to withdraw his support. Johnson had previously praised Rogan’s Feb. 3 response to accusations of spreading misinformation about COVID-19. “Great stuff here brother,” wrote Johnson on Instagram. “Perfectly articulated. Look forward to coming on one day and breaking out the tequila with you.”

Two days later, after learning about Rogan’s history of using the N-word, Johnson retracted his comment. “I’ve become educated to his complete narrative,” he tweeted. “Learning moment for me.”

Jon Stewart, Caitlyn Jenner, Marianne Williamson and Edward Snowden were among the celebrities who defended Rogan during the initial wave of Spotify-related backlash. However they haven’t commented in the wake of his N-word video.

Others continue to publicly stand by Rogan amid his latest controversy. In a now-deleted tweet, politician Andrew Yang said “I don’t think Joe Rogan is a racist.”

And looking at Rogan’s Instagram comments, there’s a stream of supportive messages. At the risk of stating the obvious, Rogan’s regular listeners clearly don’t object to the content of his show.

Rogan’s apology also spawned another installment in the ongoing debate about “censorship” and comedy, overlapping with the furor around stand-up comics like Dave Chappelle. It isn’t accurate to say Spotify is censoring Rogan (who received a $100 million payout to join the platform), but some people object on principle to the idea of Spotify removing Joe Rogan Experience episodes.

Thanks to a tweet from comedian and podcaster Whitney Cummings, this weekend saw a flood of discourse (and mockery) about whether Rogan should be judged for spreading misinformation or offensive content. “Comedians did not sign up to be your hero,” wrote Cummings, who has over 1 million followers.

But while this is a common defense for edgy comedians, it doesn’t actually make sense in the context of Rogan’s podcast. The Joe Rogan Experience is not a stand-up comedy set. It’s a talk show featuring lengthy, in-depth interviews. And by hosting presidential candidates and divisive figures like Jordan Peterson, the podcast positions itself as serious cultural commentary.

With an estimated 11 million listeners, Joe Rogan can’t avoid being taken seriously. In a more traditional media format like a late-night talk show, his guests would be vetted and his language would be toned down. He’d be less likely to host far-right thinkers alongside mainstream celebrities and politicians. He might have fact-checkers on staff, to avoid precisely the sort of situation that arose around his anti-vaccine commentary.

Spotify acquired Rogan’s show due to its popularity, but seemingly didn’t consider the consequences. The format that made Rogan famous—long, unedited interviews where guests are encouraged to be controversial—isn’t compatible with a platform where people listen to Taylor Swift and NPR. So while Rogan still has plenty of supporters, his public image is now toxic enough to cause serious problems for Spotify itself.