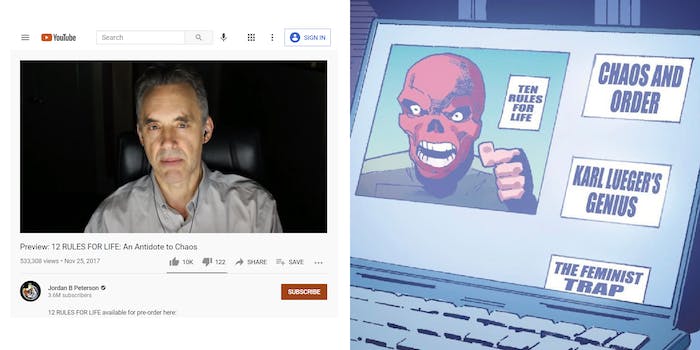 You can be forgiven for forgetting all about Jordan Peterson. In a year where far-right characters were louder than ever, advocating against lockdowns and for overthrowing the government, Peterson was largely absent from the discussion.

That’s mostly because he had a rough go of it, struggling with an addiction to anti-anxiety medications, being in a coma, and contracting COVID-19.

But he’s finally speaking up loudly today. What issue is the clean-your-room, pull-yourself-up-by-the-bootstraps motivational speaker using as his triumphant return to the public discourse?

That the Nazi in a three-year-old Captain America comic takes philosophical cues from him.

In the comic, which a user posted to Twitter, Red Skull is highlighting some of Peterson’s most prominent talking points, like his Twelve Rules for Life, his discussions of chaos and order, and anti-woman theories.

In another screenshot, Captain America talks about the weak young men looking for purpose, another of Peterson’s theses on life.

The panels come from Captain America (2018) #28, which was penned by former Atlantic writer Ta-Nehisi Coates, whom conservative thinkfluencers have long derided for his outspoken matters of race.

That Coates would put their thoughts as a precursor to the rise of Nazism and fascism, which Captain America is known to fight, makes perfect sense.

It seems especially prescient given what we’ve seen over just the past few months when the far-right rank-and-file advocated for the overthrow of American democracy after taking years of cues from the party’s figureheads.

The news of the old comic upset others in Peterson’s class, miffed by the comparison.

But, as pointed out online, Peterson went to Russia to seek secret medical treatment, which left him in a coma. Sure sounds like the backstory to a villain.