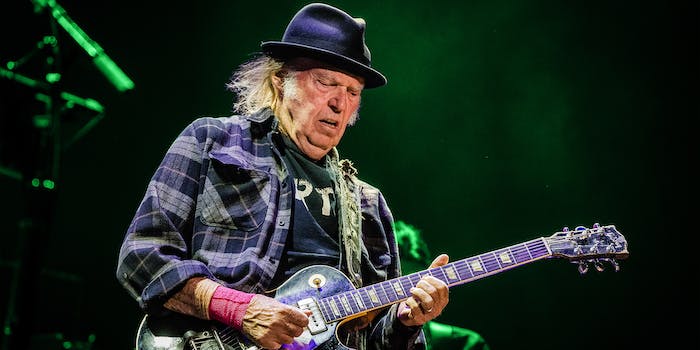 After signing a $100 million exclusive deal with Spotify in 2020, Joe Rogan is the platform’s most popular podcaster. However, he’s also the most controversial, regularly accused of spreading conspiracy theories and giving voice to far-right talking points.

Throughout the pandemic, Rogan has shared anti-mask and anti-vaccine views on his podcast, recently facing backlash for hosting the prominent anti-vaxxer Dr. Robert Malone. Now he’s attracting criticism from an unexpected but attention-grabbing source: Singer/songwriter Neil Young, who published (and then deleted) an open letter asking Spotify to remove his music in protest.

“They can have Rogan or Young. Not both,” he wrote. Posted on Tuesday, the letter was aimed at Young’s manager and record label, who control the rights to his music. “I want you to let Spotify know immediately TODAY that I want all my music off their platform,” Young demanded. He directly called out Spotify for “spreading fake information about vaccines – potentially causing death to those who believe the disinformation.”

A prolific and beloved musician known for songs like “Harvest Moon” and “Heart of Gold,” Young has a long history of activism. So while he’s not exactly a top Spotify artist, this statement quickly brought negative attention to Rogan’s podcast.

Although Young’s original letter was deleted, he published another one on Wednesday, describing Spotify as “a very damaging force via its public misinformation and lies about COVID.” He also called upon other artists to leave Spotify in protest of Rogan’s podcast.

Spotify agreed to Young’s request and is now removing his back-catalog from the platform. In a statement to the Hollywood Reporter, a Spotify representative said:

“We want all the world’s music and audio content to be available to Spotify users. With that comes great responsibility in balancing both safety for listeners and freedom for creators. We have detailed content policies in place and we’ve removed over 20,000 podcast episodes related to COVID since the start of the pandemic.”

This is the first time Spotify has released a statement regarding COVID-19 misinformation, although the company has already had to deal with internal complaints about Joe Rogan Experience content.

The Daily Dot has reached out to Joe Rogan’s representatives for comment.