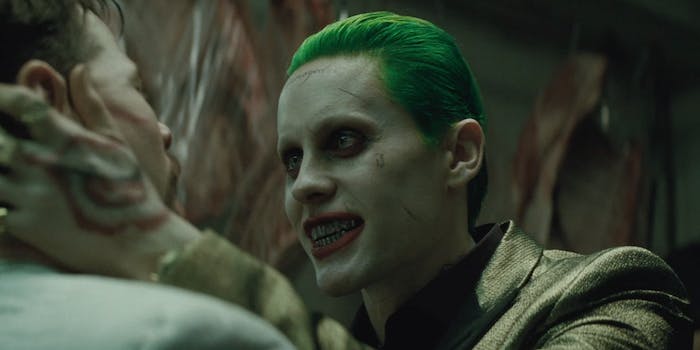 Leto is filming new scenes for the Snyder Cut.

Zack Snyder’s cut of Justice League will air as a four-part HBO Max miniseries, featuring plenty of previously unseen material. That apparently includes characters who never appeared in Joss Whedon’s theatrical cut of the film, such as Jared Leto’s Joker.

According to The Hollywood Reporter, Leto has joined the film’s belated reshoots, reprising his role alongside Ben Affleck (Batman), Ray Fisher (Cyborg), and Amber Heard (Mera). This means Snyder is filming even more new scenes than we thought, three years after Justice League‘s original release.

Leto first played the Joker in Suicide Squad, a highly publicized role that divided fans and critics. The film itself was generally not well-received, and Leto attracted a lot of attention for his controversial behavior on set. His version of the Joker was meant to return for other films but was overshadowed by Joaquin Phoenix’s starkly different depiction of the character in 2019.

Leto has since been attached to a couple of DC movies currently in development, but nothing is actually in production yet. So Zack Snyder’s Justice League will mark his first return to the role. It’s unclear how he’ll play into the overall story, which features a massive ensemble cast. Presumably, Leto’s role will be more of a cameo, tying into whatever Affleck is currently reshooting as Batman.

The more actors return (or in this case, join the cast) for the Snyder Cut, the more expensive it sounds. The original Justice League reportedly didn’t turn a profit for Warner Bros., and while Snyder has a devoted fanbase online, it’s unclear whether that audience will justify the studio spending upwards of $30 million (or, according to some estimates, as much as $70 million) on re-editing and adding new scenes to an extended edition of the film.