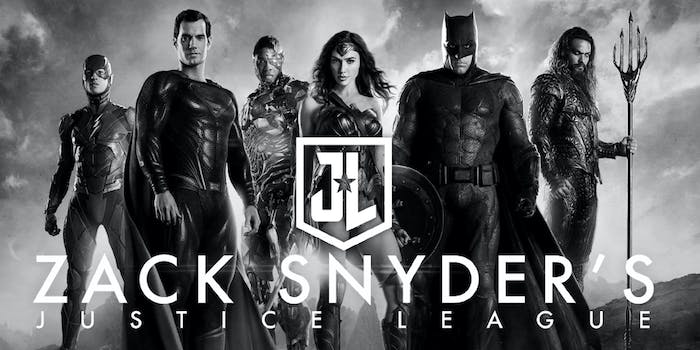 After more than two years of fan campaigns, it's finally happening.

After years of hashtag campaigning, charity fundraisers, harassment, and a larger push centered around Zack Snyder’s fabled cut of Justice League that went more mainstream with a billboard at San Diego Comic-Con and support from the film’s stars, HBO Max confirmed that the Snyder Cut is real—and it’s debuting on HBO Max.

Snyder made the announcement Wednesday during his live commentary of Man of Steel, where he was joined by star Henry Cavill. An exact release date has not been announced, but in a press release, HBO Max revealed that it would be released in 2021.

“I want to thank HBO Max and Warner Brothers for this brave gesture of supporting artists and allowing their true visions to be realized. Also a special thank you to all of those involved in the SnyderCut movement for making this a reality,” said Snyder in a statement.

On the social media platform Vero, Snyder was even blunter with his reaction: “This shit is for real.”

“Since I got here 14 months ago, the chant to #ReleaseTheSnyderCut has been a daily drumbeat in our offices and inboxes,” said Robert Greenblatt, Chairman, Warner Media Entertainment and Direct-To-Consumer. “Well, the fans have asked, and we are thrilled to finally deliver. At the end of the day, it really is all about them and we are beyond excited to be able to release Zack’s ultimate vision for this film in 2021.”

In an interview with The Hollywood Reporter, Snyder said he got a call with Emmerich last November, a day after #ReleaseTheSnyderCut got its biggest push yet as it trended worldwide with support from Ben Affleck, Gal Gadot, and Ray Fisher. In subsequent months, Snyder, producer (and Snyder’s wife) Deborah Snyder had to figure out how to make the Snyder Cut possible. In recent weeks, Snyder began to contact some of the cast and original post-production crew and floated the possibility of a four-hour cut (which adhered closer to Snyder’s original vision) or as six “chapters” of television.

“It will be an entirely new thing, and, especially talking to those who have seen the released movie, a new experience apart from that movie,” Snyder explained.

But the Snyder Cut promise from HBO Max does come with some caveats. A ready-made Snyder Cut doesn’t actually exist—and what does needs some kind of overhaul before its release. Although Snyder did deliver a preliminary cut to Warner Bros. he left Justice League in March 2017 after his daughter died by suicide; Joss Whedon took over directing duties and reshoots. The ultimate result, 2017’s Justice League, was reamed by critics while fans mocked the film’s poor attempts to digitally remove Cavill’s mustache (which he grew for Mission: Impossible – Fallout and wasn’t allowed to shave off during reshoots).

The final product of the Snyder Cut still needs visual effects added to it, and he might need the cast to record additional dialogue. All in all, The Hollywood Reporter estimates that making the Snyder Cut a tangible thing will cost anywhere from $20 million to $30 million.

The Snyder Cut has always been a fever dream. It was this fantastical idea, something that fans could cling onto amid a disappointing end result in the version of Justice League that we got, and those who campaigned for it did raise a lot of money for charities; last November, #ReleaseTheSnyderCut raised more than $110,000 toward suicide prevention. But even amid sincere wishes for Snyder to see his original vision of Justice League fully realized, #ReleaseTheSnyderCut was always plagued by waves of fan entitlement and participants who harassed critics of Snyder’s DC Comics films, and even innocuous tweets put out by Warner Bros. or HBO Max were swarmed by people calling for the Snyder Cut.

Still, we might not know when we’re getting the Snyder Cut, but if nothing else, knowing that it exists and that it will eventually be released probably lifts a heavy weight off of HBO Max’s shoulders.