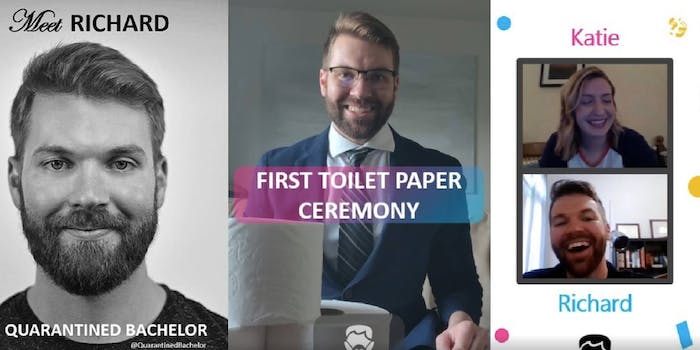 Instead of roses, the contestants receive toilet paper rolls.

In case you’re in need of something else to binge during your coronavirus lockdown, there’s a new Instagram “series” called the Quarantined Bachelor, which puts a spin on the classic Bachelor series.

Two San Francisco residents James Parenteau and Tyler Cohen had originally planned to start a live dating show in the city, but they decided to switch to an Instagram show after the coronavirus began spreading in the United States, according to a local ABC affiliate.

“Modern problems, I guess, need modern solutions, and I felt like this is kind of an important way to let love grow still during shelter-in-place,” Parenteau told ABC.

The point of the contest is to see who the “bachelor” or “bachelorette” chooses to go on a real, in-person date with after the coronavirus quarantines are lifted.

The masterminds behind the Quarantined Bachelor began the series by showing off their first bachelor, Richard Shall. Then, they created an online contestant application and chose five quarantined contenders.

The series begins with a meet and greet with the bachelor and the contestants. The contest then ramps up with one-on-one speed dates.

That’s when the first “rose ceremony” takes place. But because this is a quarantine-style contest, the bachelor gifts toilet paper instead of a rose.

The whole process lasts a little over a week, and it’s all available on the Quarantined Bachelor Instagram page.

The Instagram page announced that the series has a new bachelorette, and the second season will premier on Monday.