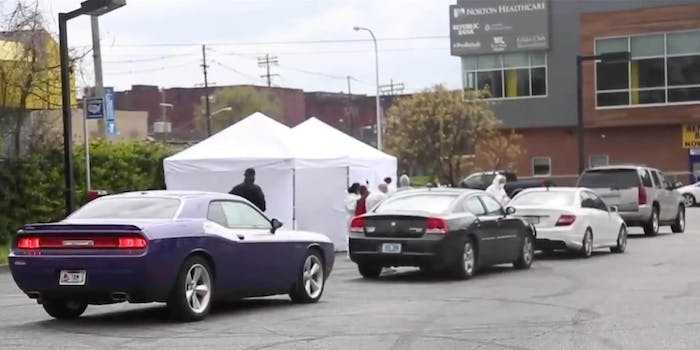 'They would test somebody and use the same gloves they used on the person before.'

Police in Kentucky are investigating a coronavirus-related scam after numerous alleged drive-thru testing sites appeared across Louisville this week.

One of the sites, set up outside of a gas station, was charging $240 dollars for what was claimed to be a COVID-19 test that could produce results in as little as 24 hours.

Reporters with the Louisville Courier Journal confronted the alleged ringleaders as concerned residents in the hopes of receiving a test.

One man identified as Monquiz W. pushed back on reporters’ questions, arguing that filming the site was in violation of HIPAA laws, designed to protect the privacy of medical patients.

Ironically, as pointed out by one journalist, a certificate touted by the group as proof of their authenticity misspelled HIPAA.

Despite defending the testing site as sanctioned by local and state officials, the group began to pack up and leave as scrutiny from onlookers intensified.

“They would test somebody and use the same gloves they used on the person before,” James said. “They get your $240 dollars plus they can turn in fake Medicaid claims.”

One woman that fell for the drive-thru coronavirus scam, but who later was able to get tested at a local hospital, decried those involved as “truly demonic.”

“I am terrified that I’m going to die in my sleep and leave my kids alone so that’s why I went,” the woman said. “Then to find out that they didn’t help me.”

A spokeswoman for Louisville Mayor Greg Fischer has confirmed that local law enforcement groups are looking into the matter and are considering “possible action.”

“At this time, we are advising residents experiencing symptoms to seek COVID-19 testing from hospitals, health care providers or government resources,” the spokeswoman said.

Unfortunately, this is not the first time Louisville residents have been confronted with such a scam. Just last year, similar pop-up sites appeared in parking lots and claimed to be testing for cancer.