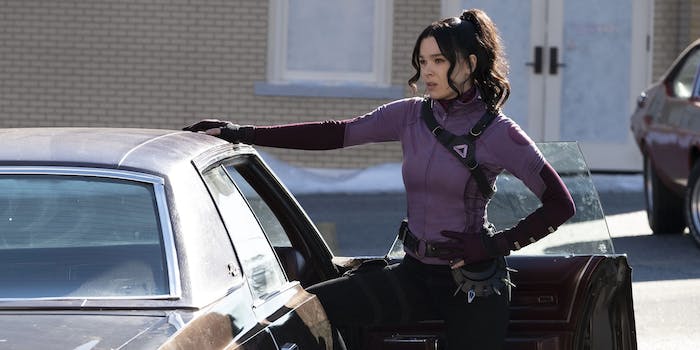 This recap includes spoilers for Hawkeye episode 4: “Partners, Am I Right?”

This episode was all about building up (and then breaking down) relationships. Just as Kate Bishop was beginning to trust her new stepfather Jack Duquesne, she learned he was even more dangerous than she originally suspected. And while Kate spent most of the episode thinking she and Clint were becoming true partners in crime-fighting… Clint really just wanted her to stay out of the way.

Hawkeye has already included several callbacks to Black Widow, which makes sense because she was Clint’s most important MCU co-star. His wife Laura is still virtually a footnote—an unfortunate byproduct of the fact that narratively speaking, she shouldn’t exist. With Natasha Romanov though, viewers can share Clint’s grief. We can also draw obvious comparisons between Kate (a naive, ridiculously upbeat college student) and the women of the Black Widow program: A squad of steely-eyed assassins. The Tracksuit Mafia are an appropriate training-wheels problem for Kate to solve as a newbie superhero, but Yelena is way above her paygrade.

Like Black Widow, Clint is struggling with guilt over his past—specifically his stint as Ronin. “I hurt people,” he tells Kate. “I was a weapon.” He wants to discourage her hero worship, without much success. Overall, I still have my doubts about whether Hawkeye can adequately handle Clint’s morally ambiguous role. As I said last week, this show (and the MCU in general) has a wildly uneven attitude to his violent history.

After confronting Duquesne and pausing for a Christmassy interlude, Clint and Kate launched into a pair of find-the-Macguffin missions. Clint sent Kate to retrieve his trick arrows from the LARPers we met in episode 2, and then they both went to find a missing watch… which turned out to be in Maya Lopez’s apartment, kicking off the fight scene where Yelena comes in.

(Just as a side note, the show’s depiction of LARPers kind of sucks. LARPing is an intrinsically dweeby hobby, making it low-hanging fruit for TV comedy. But isn’t bullying the nerds kind of passé? Not to mention hypocritical for Marvel, which is already Nerd Central. It just feels unnecessarily self-conscious for Hawkeye to include multiple jokes about how silly and embarrassing it is to wear a costume. And in addition to this rather tired humor, Hawkeye‘s LARPers are all cops and first responders; the weirdest form of copaganda I’ve seen from the MCU to date. Like, sure. I’m sure some cops are also fantasy LARPers in their spare time. But “diverse team of quirky nerds” is a pretty wild way to characterize the NYPD.)

With two episode to go, Hawkeye will soon ramp up toward its inevitable Final Battle. For a lot of fans, the big question is whether a certain Marvel villain will show up. On the one hand: Great character! On the other, this show already has enough antagonists. The MCU is yet to learn this lesson, but there’s such a thing as too many Marvel universe tie-ins.