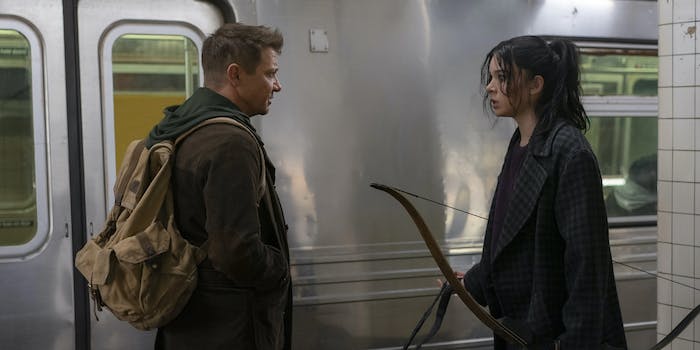 Disney+’s ‘Hawkeye’: A bland show for a bland superhero

This review includes minor spoilers for Hawkeye episodes 1 and 2.

Appropriately for the most basic Avenger, Hawkeye is a simple, conservative kind of superhero show. Set during the run up to Christmas, Clint (Jeremy Renner) and Kate battle street-level villains while grappling with private family conflicts. Unlike WandaVision or The Falcon and the Winter Soldier, there’s no attempt at high-concept storytelling. If you already love Hawkeye, you’re probably fine. If not, the show does little to flesh out Renner’s characterization. So far, anyway.

Renner’s Hawkeye is very different from the guy in the Fraction/Aja comics, completely changing his partnership with Kate Bishop—and ultimately making this a less interesting story. In the comics, Clint is a lovable goofball with a chaotic personal life and an instinct for self-sabotage. He’s perpetually injured; a B-list outsider compared to the main Avengers. None of this is viable for MCU Hawkeye: An established, middle-aged hero with a wife and kids, famous enough to appear in a Broadway musical about the Battle of New York. (This gag, incidentally, makes no sense. Why would Hawkeye take his children to see a show about the MCU’s equivalent of 9/11, starring three of his dead friends? His kids literally referred to Black Widow as Aunt Nat!)

To accommodate Renner’s characterization, Hawkeye flips the dynamic between its two leads. Now Kate is the messy one, while Clint is a mature authority figure who tries to keep her out of trouble. In other words, they reverse the comic’s subversion of typical mentor tropes. Clint’s family complicates the situation further because, in order to tell a fun story about Kate and Clint fighting Russian mobsters, Clint must abandon his real kids in favor of this new kid. Will Hawkeye manage to wrap things up in time for Christmas?? Who cares! His family life always seemed highly unconvincing. Two episodes in, I struggle to describe his wife (Linda Cardellini) as anything other than “supportive.” Her entire role is to take care of the kids while he’s off on missions.

In trying to adapt the Fraction/Aja comics, the MCU forces Renner’s Hawkeye into a story where he doesn’t belong. This guy is a grim, paramilitary killer! A more sophisticated show might explore the alarming compartmentalization between his cozy paternal side and his career as a secret agent, but that clearly isn’t going to happen here. Hawkeye’s Avengers: Endgame killing spree is now the backstory for Kate’s first superhero costume.

Kate fares much better in the first two episodes, starring in a classic superhero origin story. Sure, it’s not exactly original, but Hailee Steinfeld is very watchable and feels appropriately youthful for Kate’s privileged upbringing. At 22 years old, she’s living off her mom’s credit cards and waiting to join the family business. When she causes property damage with an irresponsible archery stunt, her mom (Vera Farmiga) pays for that as well. So while some Marvel heroes were more grown-up at her age, Kate still fits neatly into the YA genre. Similarly, her main antagonist is a family-friendly kind of villain: her mom’s slimy new boyfriend Jack Duquesne (Tony Dalton).

Hawkeye is fairly entertaining so far, but there’s an air of pointlessness around the whole operation. Disney wanted to utilize Renner’s star power, but instead of finding something interesting to say about MCU Hawkeye (an uphill battle!), they chose to adapt a comic with no relevance to the character at hand. All the callbacks are superficial: The purple title sequence, the presence of Pizza Dog, the stereotypical Tracksuit Mafia gang. A lowest-common-denominator regurgitation of a more sophisticated work.

Kate Bishop’s origin story would be an acceptable show in itself, falling somewhere between Daredevil and Supergirl in tone. But Disney+ is determined to frame these MCU spinoffs as important events, wedded to movie canon. This attitude feels particularly silly for Hawkeye, a formulaic vigilante show that shouldn’t require 10 years of Avengers backstory. Some details from the first two episodes are promising, like the introduction of Clint’s hearing loss. Hailee Steinfeld already seems destined for a flourishing career in the MCU. Overall though, Hawkeye is kind of forgettable. And for fans of the Fraction/Aja comics, it’s a dispiritingly shallow copy of the real thing.

Update Nov. 24, 12pm CT: This story has been corrected to reflect the name of the creator of Hawkeye, Jonathan Igla.