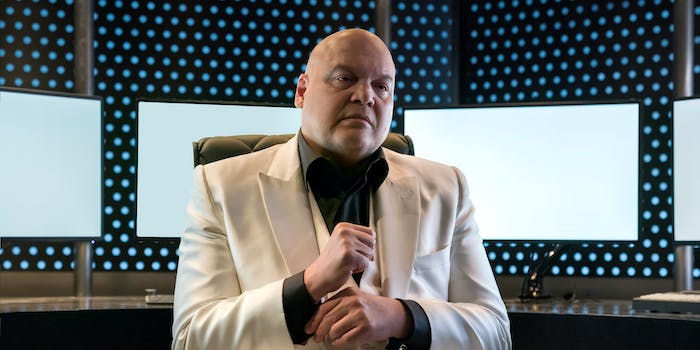 Is ‘Hawkeye’ hinting at an upcoming role for Daredevil’s Wilson Fisk?

When Marvel revealed that Echo (aka Maya Lopez) would appear in the Disney+ show Hawkeye, fans began to wonder if crime boss Wilson Fisk (aka Kingpin) will have a role too. After all, he’s her adoptive father in the comics. The second question involves casting: Would Fisk be played by Vincent D’Onofrio, who portrays Fisk in Netflix‘s Daredevil series?

Echo is a deaf Native American superhero with impressive combat skills, appearing in numerous comics alongside characters like Daredevil and the Avengers. Wilson Fisk is obviously a central figure in her origin story.

Played by Alaqua Cox in Hawkeye, she’s introduced as an antagonist, vowing revenge against Ronin (aka Clint Barton) for killing her father William Lopez. William was a member of the criminal gang known as the Tracksuit Mafia, and during a flashback in episode 3, he mentions a character who may be Fisk.

The flashback sees a young Maya/Echo being collected from a martial arts class by her dad—accompanied by an unnamed “uncle.”

We don’t see the uncle’s face, but based on context clues, Marvel fans are speculating that he’s Wilson Fisk. He’s an obvious contender for a role in the show’s main plot because the Tracksuit Mafia have an unseen boss pulling the strings behind the scenes. That’s Wilson Fisk’s archetypal role in the comics.

Wilson Fisk’s arrival would be a big deal, not just because Vincent D’Onofrio was so popular Daredevil, but because he’d connect Daredevil to the main MCU. He’d be the first official crossover from Netflix’s Defenders universe and the “official” canon of the movies and Disney+ shows.

A lot of Marvel fans are also hoping that Daredevil himself will join the MCU, supposedly receiving a cameo role in Spider-Man: No Way Home. A Disney+ Wilson Fisk cameo could be a step in that direction.

Vincent D’Onofrio has said several times that he’d love to reprise his role as Kingpin, but he hasn’t confirmed a role in Hawkeye. The most he’s done is express excitement about the show. So if Fisk does appear in the coming weeks, his role is meant to be a surprise.