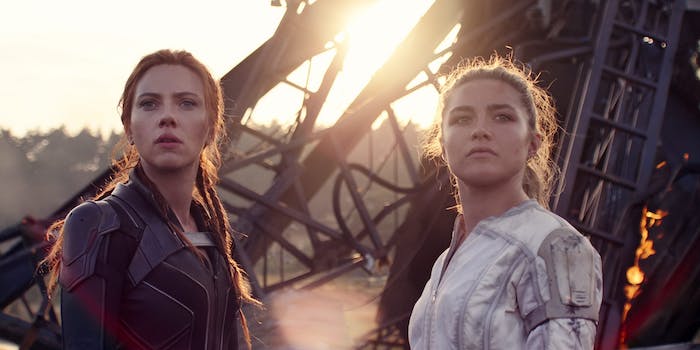 Review: ‘Black Widow’ is a copycat spy thriller, failing to engage with Natasha Romanoff’s dark side

Like several recent MCU hits, Black Widow combines Marvel’s action-comedy brand with a secondary genre. This time around, the experiment fails. Directed by Cate Shortland with a screenplay by Eric Pearson, Natasha Romanoff’s long-awaited solo movie is a derivative spy thriller, delving into Natasha’s backstory as a Russian agent. Despite a promising introduction, it struggles to find a balance between its darker themes and Marvel’s perky blockbuster tone.

Natasha’s backstory has a disturbing subtext, but Disney isn’t equipped to handle it—hindered, perhaps, by the studio’s puritanical streak. Cate Shortland seems keen to avoid the MCU’s widely-criticized history of sexualizing Black Widow, solving the problem by removing any hint of sex. This makes the main storyline feel oddly bowdlerized. At base level, it’s a female empowerment narrative about two women confronting their abuser. But why does the Red Room only recruit girls, brainwashed into complete obedience? The spectre of sexual violence lurks in the background, unmentioned aside from one shockingly bold joke about the girls having their reproductive organs forcibly removed.

This isn’t to say that I want to see Disney tackle sexual coercion in a PG-13 blockbuster. But by dancing around the issue, Black Widow ends up with a wildly uneven tone. By comparison, Red Sparrow, Jennifer Lawrence’s terrible Black Widow ripoff, went too far in the other direction, reveling in the heroine’s exploitation. It’s a difficult topic to get right, and Marvel tries to dodge the issue by briefly hinting at darker themes before yanking our attention back to quips and explosions. The film seems determined to interrupt every sincere moment with jokes or self-aware references to the Avengers, undercutting the parts that feel more like a straightforward spy thriller.

One wonders why Marvel opted to tell this particular story in the first place, since the MCU has already explored similar ideas elsewhere. While Jessica Jones‘ unflinching rape/revenge story isn’t technically MCU canon, Captain America: The Winter Soldier hinges upon Bucky Barnes being mind-controlled and surgically altered by Hydra. His handler, Alexander Pierce (Robert Redford), is a far more menacing and believable figure than Black Widow‘s Dreykov, a one-note Russian villain who belongs in a film from 1985. In Bucky’s role, we see more of the emotional complexity that Black Widow sadly lacks, despite a few engaging scenes between Pugh and Johansson.

In addition to feeling ten years late within the MCU, Black Widow echoes a dated subgenre of anti-Soviet action flicks. Most of the main characters are played by British or American actors putting on Russian accents: Florence Pugh, Ray Winstone, Rachel Weisz and David Harbour. Weisz and Harbour play parental figures from Natasha and Yelena’s childhood, and while Weisz is as charismatic as ever, Harbour’s character is a cringeworthy Russian caricature. Nostalgic for the Cold War, he’s a failed supersoldier who obsesses over an imagined rivalry with Captain America. He’s also a stupid, hard-drinking misogynist whose body is the butt of fat jokes. Oof.

Thanks to her piecemeal appearances in multiple MCU films from different directors, Natasha’s characterization has always been uneven. At her best, she’s a manipulative strategist with a dry sense of humor. Some of that humor persists in Black Widow, but as the film wore on, I noticed that this version of Natasha… isn’t very smart? Without much opportunity for clever double-crosses or spycraft, Natasha only gets a few chances to truly outwit her enemies—they’re not especially insightful. This feels like a real loss for Johansson’s final outing as Natasha Romanoff, whose best scenes may actually be the childhood flashbacks starring 13-year-old Ever Anderson. The 2016 storyline is dominated by overstuffed action sequences that feel like hollow copies of Mission Impossible and The Bourne Identity.

Like many superhero movies, Black Widow raises the stakes to an absurd degree, forgetting that Natasha does her best work with the precision of a scalpel.

Black Widow will release in theaters and on Disney+ with Premier Access on Friday, July 9.