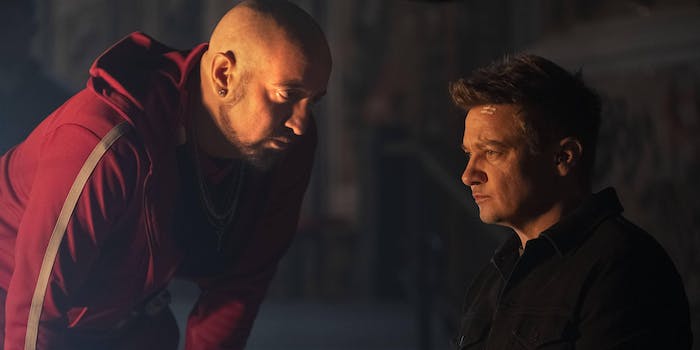 The show also tries to explore Hawkeye's moral ambiguity - which may be a mistake.

After a rather generic introduction, Hawkeye turns up the heat with an action-packed third episode, hinging on some excellent action scenes directed by Bert and Bertie. Once again, the show draws directly from the comics by Matt Fraction and David Aja—so much so that it’s outrageous they don’t get a co-creator credit. That car chase came straight from Hawkeye #4 (2012).

Fraction (the comic’s writer) participated as a consulting producer, but only because he and Hawkeye’s first director were connected by a mutual friend: Seth Meyers. Meanwhile, Aja (the artist) and Matt Hollingsworth (the colorist) seemingly didn’t receive a paycheck. One can’t help but recall the scandal behind the Winter Soldier, whose co-creator was so disgusted by his lack of MCU royalties that he stopped working for Marvel. Hawkeye is an even more direct page-to-screen adaptation, from its purple motifs to the conflict between Clint Barton, Kate Bishop, and the Tracksuit Mafia. And, of course, Clint’s hearing loss.

Without hearing aids, Clint is almost entirely deaf—a recent development in the MCU. He’s still adapting to the change, unable to lip-read and only learning limited ASL. This puts him at a disadvantage to the new antagonist Maya Lopez/Echo (Alaqua Cox), a deaf woman who criticizes Clint’s reliance on “technology,” touching upon real-life divisions within the Deaf community. It’s the kind of representation that Deaf and hard-of-hearing Marvel fans have been clamoring to see for years.

Unlike the smarmy Jack Duquesne, Echo is a sympathetic antagonist with an outsider-empowerment arc. She’s only in the “villain” slot because Ronin killed her father, a former Tracksuit Mafia leader. A flashback shows Clint/Ronin tearing a bloody swathe through the gang, and Echo understandably wants revenge. Hawkeye (and his fans) must face up to the moral repercussions of his vigilante past. However, it’s hard to square this away with Hawkeye’s current role, because he’s still killing people indiscriminately.

During this week’s big action sequence, Clint shoots several gangsters. He also gives an explosive arrow to his naive civilian protégé Kate, who promptly blows up a van full of people. This is, of course, perfectly normal for superhero media, a genre based around righteous violence. These stories operate on a kind of kayfabe logic where main characters can’t die unless it’s narratively important, and the lives of criminal goons are disposable. We suspend our disbelief for violent heroes who “do not kill,” which in the case of something like Netflix’s Daredevil was increasingly difficult. That guy kept smashing people’s skulls with his supposedly non-lethal tactics! But I digress. Hawkeye canonically is a killer, and the show’s attitude to this is utterly incoherent.

We’ve all seen movies where a grizzled antihero is softened by a younger sidekick, but in the narrative of the MCU, Hawkeye hasn’t really earned this arc. In theory, he’s a morally ambiguous figure. But according to the movies, his actions are acceptable because he’s killing people as a government agent or Avenger. He’s in a different position compared to someone like Wolverine, who is overtly dangerous and morally tormented, providing an emotional contrast to characters like Rogue or Laura Kinney in Logan.

This episode was certainly fun to watch, expanding the scope of Hawkeye’s archery hijinks. But as soon as you pay attention to the concept of Clint’s guilt about Ronin, things start to get messy. “I’m not a role model,” he says at one point, balking at Kate’s hero-worship. Fair enough! The show is already grappling with Kate’s childhood idolization of a guy she really doesn’t know. However, the situation around Echo’s father is more complicated.

If we open the door to the idea that Hawkeye’s targets are human beings with innocent families, it’s impossible to accept Clint’s troubled-but-lovable dad persona. And I don’t think Marvel wants to go that far. Hawkeye may share some similarities with Daredevil and Jessica Jones, but it’s much lighter in tone. It’s setting things up for a cozy family Christmas, not a moral reckoning over Clint’s entire career. This problem is nowhere near as awkward as The Falcon and the Winter Soldier’s chaotic political messaging, but it’s still squarely in zone of “don’t think about it too hard.” A recurring issue for Marvel’s Disney+ shows.