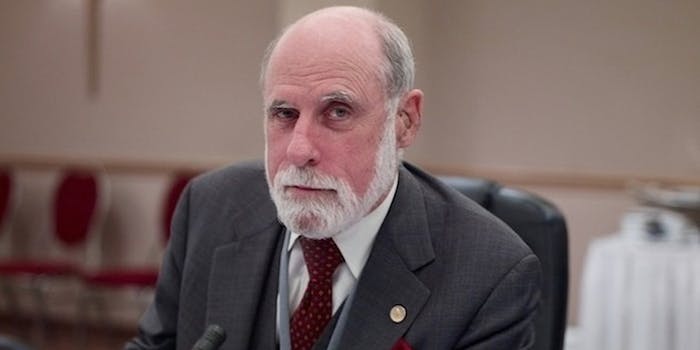 What does Google want with Vint Cerf’s Interplanetary Internet?

Cerf may be close to fulfilling his goal of creating a computer network in space, but his employment by Google complicates matters.

Over 15 years ago, Vint Cerf, “one of the fathers of the Internet,” and some of his pals at NASA’s Jet Propulsion Laboratory started an absurdly ambitious project. They wanted to create a computer network in space, one that would let nodes located anywhere from the International Space Station to the surface of Mars communicate seamlessly across hundreds of thousands of miles. They call it the Interplanetary Internet—or InterPlaNet, if you will—and according to a new Wired interview, Cerf is getting closer to fulfilling his decades old ambition of networking the celestial bodies.

There’s only one problem: Vint Cerf works for Google now. Back in the 1990s when he got involved in this interplanetary Internet idea, Cerf was working hard to preserve the founding principles of the Web and joined the board of the Internet Corporation for Assigned Names and Numbers (ICANN) in 1999. It’s fairly safe to say that there was a non-profit spin on these gigs, despite the fact that the Internet has become a profit-making machine. No wonder Google was interested in hiring the guy who practically invented the damn thing.

The specifics of Cerf’s role at Google are unclear. When he was hired in 2005, the Associated Press reported that Google hired the sextagenarian “to float more ideas and develop new products, adding another weapon to the online search engine leader’s rapidly growing arsenal of intellect.” The report adds, “Cerf’s official title will be ‘chief Internet evangelist,’ but he is determined to be more than a figurehead or detached visionary.”

But isn’t it a little unsettling that a project as huge as an interplanetary Internet is being masterminded by an employee of Google—which dominates the Web to an incomparable degree—even if he is just a figurehead? The technology’s already being tested, and it’s no longer a hypothetical idea. It makes you wonder how much access to this new network Google will have. Maybe there’s even a Google Galactic Fiber business plan floating around Mountain View, probably underneath a pile of discarded Google Glass prototypes.

It might feel unsettling, but there a couple of reasons to believe that everything is going to be OK. Google is not going to take over the galaxy any time soon. For one, Cerf works for Google, but he’s not exactly an evangelist, at least for Google’s products. He’s publicly condemned the company’s viewpoint on certain issues in the past, and just last year declared that Google’s grasp on the search market isn’t really as firm as people might think.

The other encouraging thing about the future of the interplanetary Internet is how the space industry is making a successful transition from being a public works project to being a private enterprise. With companies like SpaceX making deliveries to the ISS more cheaply than governments could, it’s apparent that we’re on the cusp of a potentially huge new industry, and the billions of dollars worth of funding that companies like Google can provide will come in handy soon. While some may get anxious about a massive corporation like Google or Virgin expanding into space, it’s actually much to the public’s advantage to have a guy like Vint Cerf dictating the basic rules.