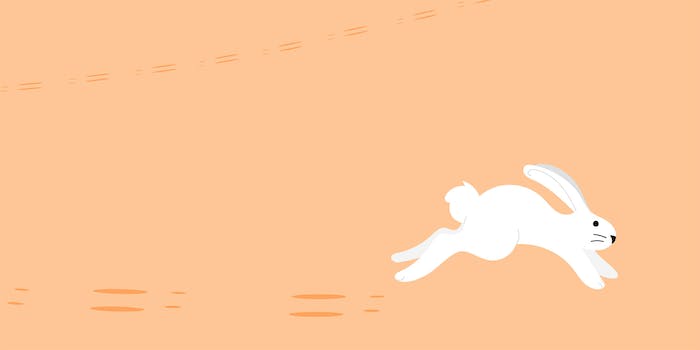 The proliferation of fake news that emerged during the 2016 presidential election is still growing, and it’s much worse than you imagined. On the internet, you can now find a whole mess of conspiracy theories surrounding Russia, President Donald Trump, Hillary Clinton, and anonymous posters like QAnon. There’s a hashtag for one involving many, many layers. It’s called “Follow The White Rabbit.”

QAnon and the Follow the White Rabbit conspiracy theory

Some Twitter users (who are, notably, Pro-Trump) used the hashtag to reference an Alice in Wonderland-themed party that Obama threw in 2012. In this scenario, Obama is apparently Alice. Are you already lost? You should be. It doesn’t make any sense.

With unempoyment over 10% in 2009, @BarackObama held an extravagant Alice in Wonderland party. He is a man of the people!

If Obama is Alice, then the White Rabbit is…Hugh Hefner?

Many of the tweets that use the White Rabbit hashtag also reference #QAnon or simply Q. What is that? Or, more accurately, who is QAnon? According to a Reddit post from November 7, it stands for an anonymous person who claimed to have Q-level security clearance. This person posted theories about a sequence of events that are supposed to rid the world of evil and take down a few powerful families, signing “Q” at the end. Q apparently made references to Alice in Wonderland, which prompted the hashtag.

Now, Q’s followers are looking for clues that the claims are legit. Here are some of the conspiracies emerging from the Follow the White Rabbit hashtag:

People think that Hillary and Chelsea Clinton, as well as Sen. John McCain, hid ankle monitoring bracelets under their walkable casts. In reality, they wore the casts to treat different injuries. McCain, for instance, suffered a tear to his Achilles tendon.

Others believe that when Trump drank Fiji water during a press conference, it meant that he knows something about Pizzagate. Pizzagate, if you’ve tried to forget, claimed that Hillary Clinton’s campaign was running a pedophile ring out of a Washington, D.C. pizzeria. Of course, it’s false. But many people still believe it’s real, and those same people are supporting the White Rabbit conspiracies.

Another part of the White Rabbit conspiracy claims that the wealthy Rothschild family controls the world.

We need to look into the Rothschilds. They control the world. Is Satan who they worship?#FollowTheWhiteRabbit pic.twitter.com/tdCdQ6IDW0

This is probably as deep as you want to go into the rabbit hole. Go back now while you still know what facts are.