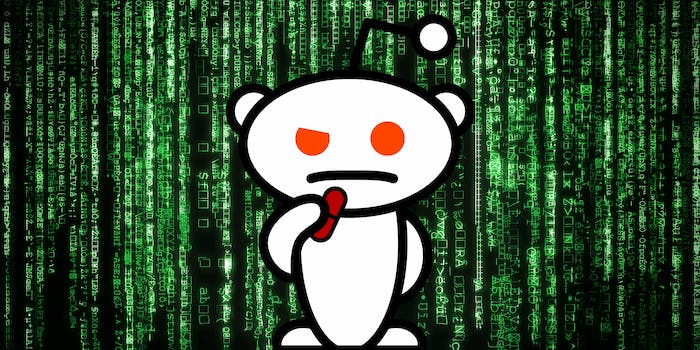 The den of misogyny is where certain men celebrate being awakened to the dangers of feminism.

If you spend enough time on social media, you might hear about being “redpilled.” In short, “redpilled” men believe they have been awakened to the dangers of feminism. The den of misogyny where certain men celebrate this freedom (by sharing memes and complaining about the very women they say they don’t need) is a subreddit called r/TheRedPill.

The name “The Red Pill” is a reference to the film, The Matrix. Morpheus (Laurence Fishburne) tells Neo (Keanu Reeves), “You take the blue pill—the story ends, you wake up in your bed and believe whatever you want to believe. You take the red pill…and I show you how deep the rabbit-hole goes.”

In the film, the red pill represents truth and power. The blue pill, on the other hand, represents ignorance and bliss. Those who consider themselves redpilled often cite an experience that makes them come to understand the “dangers” posed by feminism, progressivism, and political correctness. This experience is almost always being rejected by a woman.

R/TheRedPill currently has over 260,000 subscribers and claims to offer “discussion of sexual strategy in a culture increasingly lacking a positive identity for men.” R/MarriedRedPill, a subreddit where married men and those in long-term relationships espouse the same philosophies, has an additional 18,854 subscribers.

Who is the r/TheRedPill creator?

In terms of the scope of human history, Reddit Red Pill is relatively new. Relative to the rest of the internet, however, it’s ancient. The subreddit was founded in 2012. For most of its existence, the founder of the site was anonymous. Last year, however, The Daily Beast reported that founder pk_athiest is actually New Hampshire Republican state house member Robert Fisher.

Following the discovery of his involvement with Reddit Red Pill, of course, Fisher resigned. But he was just one of many prominent posters and moderators in the subreddit’s history. Like Fischer, most of the subreddit’s moderators maintain their anonymity. When prominent Reddit Red Pill members are interviewed, they tend to go by their Reddit username, as “Morpheus Manfred” did in his 2016 interview with The Guardian.

What is the Red Pill philosophy?

Many members of r/TheRedPill consider themselves “men’s rights activists,” and purport to assist men in custody battles and work to restore men’s self-esteem. There is also a bevy of amateur legal advice on the subreddit featuring headlines like, “First rule of dealing with rape accusations and the Police, keep your mouth shut.”

The average post on r/TheRedPill is either a complaint about women or dating. Typically, posts are laden with both profane language or subreddit-specific abbreviations and terminology. “AWALT,” for instance, translates to “all women are like this” and “incels” refers to “involuntary celibate” men who are frustrated by women’s ability to pick and choose their own sexual partners.

Even a brief journey down the rabbit hole of r/TheRedPill reveals this isn’t just an ill-advised male self-help group. Misogyny, harassment, rape denial, and so-called “pick-up artist” (or PUA) techniques also flourish there.

One of the ugliest examples of rape denial on the subreddit made headlines when users mounted defenses of the alleged rapists at Steubenville High School in Ohio and the teens who recorded video mocking the victims.

This behavior often veers into promoting or condoning illegal activity. For example, Fisher once said it was “evolutionarily advantageous” for middle-aged men to pursue teenagers on the subreddit. He continued, “Just because there’s a law doesn’t mean 15-year-old girls were always considered out of bounds.”

Many also view redpilling as a gateway drug to the alt-right. Posts that begin with PUA language often turn violent. Misogynistic language often gives way to racist and Islamophobic language as well.

The culture of “incels,” (involuntarily celibate men) has not only been strongly identified with the alt-right, but has also been linked to several mass murders, including a California killing spree that claimed six lives and a recent van attack in Toronto that left 10 dead.

Ideology isn’t the only point of connection between the alt-right and R/TheRedPill. Disgraced Breitbart pundit Milo Yiannopoulos claims to be a subscriber. The Southern Poverty Law Center and various journalists have linked a number of other figures popular in the red pill community with the alt-right.

What other controversies has r/TheRedPill been involved in?

General beliefs espoused on r/TheRedPill have not changed markedly since its inception. However, the subreddit has found itself intertwined with various movements. Some subreddit members were involved in the GamerGate controversy in 2014. For those unfamiliar with GamerGate, a movement that claimed to be in favor of “ethics in gaming journalism,” was functionally a targeted harassment campaign against women gaming journalists.

More recently, r/TheRedPill was a haven for Donald Trump supporters in the run-up to the 2016 general election. Pro-Trump propaganda and Hillary bashing content were often upvoted in 2016. Some TheRedPill users have called Trump “the red pill candidate.”

While the posts on r/TheRedPill can the gamut from sad to hilariously naive, that doesn’t mean they aren’t also often filled with hate speech and potentially dangerous. A look at the top upvoted posts offers a general survey of the tried and true preoccupations of the site.

There is a rant about the Miss USA contest before ending with the line, “All women lie about sexual assault unless due process reveals otherwise.” A post is titled, “It’s only sexual harassment if you’re unattractive.”

There are plenty of arguments online about just how harmful the “locker room talk” on R/TheRedPill actually is. With a discourse that can easily and often veer into violent misogyny and the ease with which right-wing forces from Milo to GamerGate to Trump have co-opted the subreddit to cause real damage, this debate should have put that debate to rest long ago.

No particular cultural moment seems to be drawing the focus of TheRedPill subscribers today. But the community continues to grow. Members can now enjoy the misogynistic ravings on the subreddit on the go. There are a number of podcasts on The Red Pill Network for your listening pleasure (or pain).