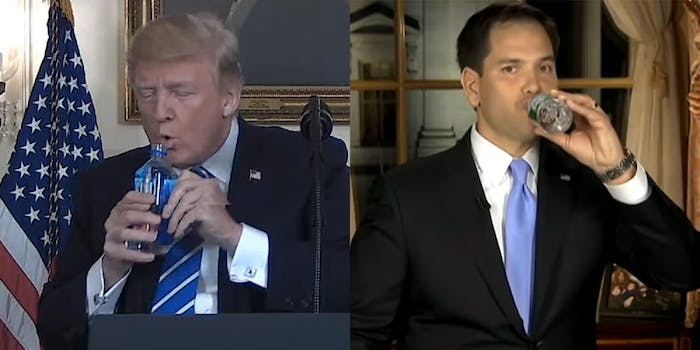 The sip heard around the world.

President Donald Trump took sips of water during a statement before the press on Wednesday, immediately bringing up memories of Sen. Marco Rubio (R-Fla.)’s infamous swig of water in 2013.

Trump delivered a scripted speech about his 12-day trip to Asia on Wednesday afternoon, touting it as the “longest visit to the region by an American president in more than a quarter-century.”

While the presser was mostly ho-hum, soon Trump clearly got dry mouth and began searching for water, quickly exclaiming, “they don’t have water, that’s OK,” before eventually finding some underneath the lectern.

The president opened the bottle—Fiji brand, in case you were wondering—and stared defiantly into the crowd before taking a gulp and continuing on with the speech. He did it again later on in his speech.

While Trump drinking water might not seem all that noteworthy, it is because he criticized Rubio for doing the same thing during his response to former President Barack Obama‘s State of the Union address in 2013, calling him a “choke artist.”

Trump also tweeted about Rubio’s water moment several times–because there is always a tweet. (Spoiler alert: He didn’t follow his own advice on how to drink water with “less negative impact.”)

Marco Rubio is being crucified by the media for drinking water during speech!

Next time Marco Rubio should drink his water from a glass as opposed to a bottle—would have much less negative impact.

For those of you who demand video evidence to compare Trump’s water-drinking gaffe versus Rubio’s, we’ve got you covered:

To his credit, Rubio leaned in following Trump’s mishap with the water bottle.

“Similar, but needs work on his form. Has to be done in one single motion & eyes should never leave the camera. But not bad for his 1st time,” Rubio tweeted.