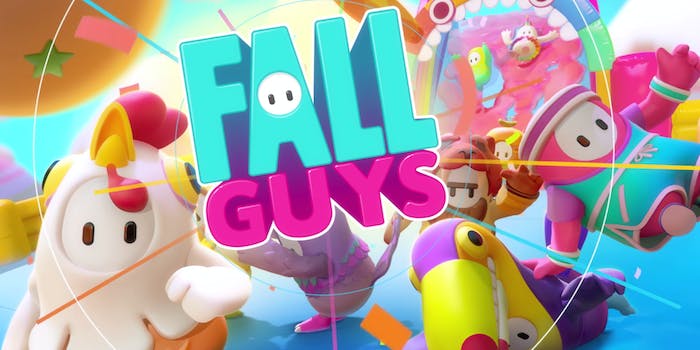 Why all your friends are obsessed with ‘Fall Guys’ memes

Everyone wants in on the 'Fall Guys' phenomenon, from memers to fast-food giants

The goofy little game has been dominating Steam charts since its release on Aug. 4. Brightly colored, chaotic, and addictive, Fall Guys was released into a bored world desperate for a good distraction.

It filled the role flawlessly. The energy around this game is so white-hot that it’s evoking Animal Crossing comparisons in the Daily Dot’s work Slack. Since its release, Fall Guys has been the subject of conversations all over social media—and of course, Fall Guys memes. Even brands are feeling the hype.

What is Fall Guys?

The concept behind this quirky little game is quite simple. The Steam description for the game characterizes Fall Guys as a “free-for-all struggle through round after round of escalating chaos until one victor remains.” The game allows up to 60 players online at once, for an anarchically delightful round of…. falling?

The game brings to mind plenty of its brightly colored predecessors but manages to slide into a category all its own. Fans of simple, but highly enjoyable titles like Rocket League, Splatoon, and the Mario franchise will find plenty to enjoy in Fall Guys.

As with anything popular, Fall Guys‘ abrupt rise to fame inspired a wealth of memes. It turns out that most people really don’t like Yellow Team.

It may be best to avoid Yellow Team, next time you pick up the game.

It doesn’t hurt that the social media manager for Fall Guys has a great presence. They might be giving Wendy’s a run for its money soon.

No seriously, the account actually gave Wendy’s a run for its money. And honestly, I don’t know who won.

It was Wendy’s. Wendy’s won.

Then there’s this guy, who has a very…. interesting theory about what those little beans look like under the costumes.

Unfortunately, the game is only available on PC and PlayStation 4. If you’re operating with an Xbox One or Nintendo Switch, you’re going to have to find something else to pass the time. For now, at least.

Despite the game’s popularity, many gamers found themselves yearning for more. Pitches for new skins and ideas for collaborations were soon pouring in. After all, who wouldn’t want to play as Chewie or Darth Vader?

Soon, companies were getting in on the action. Even KFC and Walmart are hoping to see their brands on tiny bean bodies.

Fall Guys already has some crossover costumes. Hotline Miami and Half-Life have in-game skins, but no other titles have joined them yet. Fans are hoping to see more of their favorites make an appearance as goofy, cylindrical costumes.