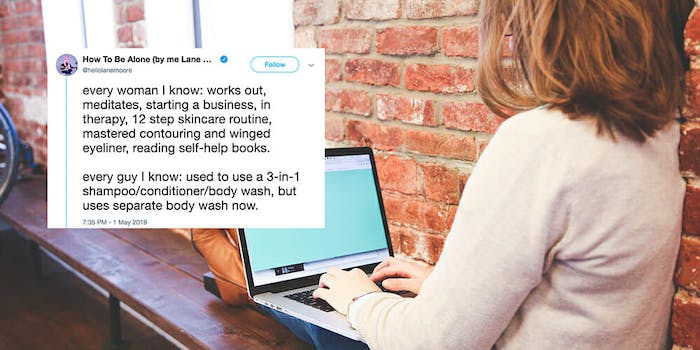 This meme illustrates the stark differences between men and women

Society expects so much from women and absolutely nothing from men.

If your Twitter feed is filled with people pointing out the stark differences between women and men, you’re not alone. A new meme floating around called “every woman I know” shows just how superior women are to men due to society’s impossible standards set for women.

Comedian and musician Lane Moore kicked off the meme by tweeting about the stereotypical beauty routine differences between the men and women in her life on Wednesday.

Moore hilariously exaggerated the disparity between the two, painting all women as masters of winged eyeliner and healthy habits, while men have barely evolved past 3-in-1 shampoo, conditioner, and body wash. This is true, so much so that the latter is marketed almost exclusively to men.

every guy I know: used to use a 3-in-1 shampoo/conditioner/body wash, but uses separate body wash now.

Over 4,000 Twitter users liked the post and hundreds flooded the comments with how much they relate to Moore’s sentiment.

Several Twitter users began taking the “every woman I know” followed by “every man I know” format and adding their own relatable version of the dunk. It seems like every woman is an overachiever, while men are just “there.”

every woman i know: posting tweets about every woman they know and every man they know that simplify the complexities of human relationships and flatten the world into binary gender categories

every man i know: jk i don’t know any men and i refuse to meet one

every woman I know: spends $100s on makeup, trying to get short stories about her ex published in the new yorker

every guy I know: only listens to playboi carti, gets too high at parties and says “aight bro I’m bout to head out,” trying to be a fortnite streamer

every woman i know: basis for a successful series of children’s books, meticulous planner with brilliant attention to detail, treasure hunt mastermind, currently camping in the ozarks

every man i know: pic.twitter.com/ZDVk6eZLx7

Of course, as is often the case with memes, people had their own ironic takes of the content.

every woman i know:

every man i know:

they are all dead. i live in a wind-swept wasteland. i have been forgotten by death and left to wander after the end of time

Every woman I know: [doesnt know any women]

Every man I know: [also doesn’t know any men. In fact lives a sad lonely life cut off from human interaction]

For such a playful jab at both men and women, Moore’s tweet still managed to ruffle quite a few feathers on Twitter. Most notably from a man who still uses 3-in-1 and was confused by the joint toiletry slander.

Can we please please stop doing shit like this, it's so fucking tiring https://t.co/ZfIX5Y0Dwk

Moore wrote that with her initial tweet, she wanted to illustrate how society expects so much from women while not expecting anything from men. After looking at all the people who had similar takes on the differences between men and women, it seems that Twitter agrees with her.