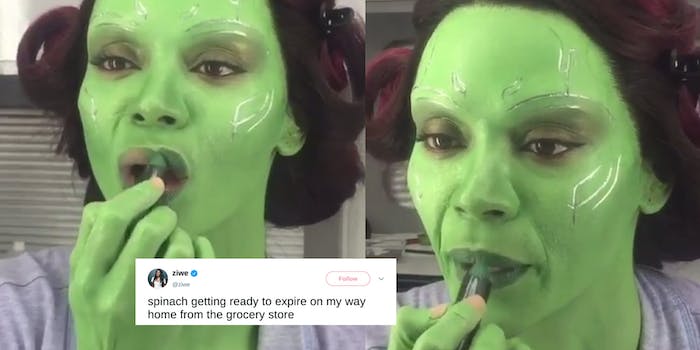 Gamora putting on her lipstick has become an omnipresent ‘Avengers’ meme

'Pickles right before getting removed from a hamburger.'

Between joking about the lighting in Game of Thrones, making new dance moves based on kills, and obsessing over America’s ass, the geeky memes have been plentiful in recent days. And after a week of pop culture being dominated by Avengers and Thrones, Gamora putting on her makeup has become a surprisingly versatile addition to the meme canon.

It all began with a video of Zoe Saldana, who plays Gamora, in mostly full character makeup applying her green lipstick. She posted it to Instagram three days ago—and now it’s everywhere.

The meme quickly became a reference to all green things, not just the deadliest woman in the galaxy. Soon, everything from lettuce to pickles was getting roasted using the brief video. The joke is that Saldana is a stand-in for a green object, getting ready to do something bold or evil or funny.

My arugula-kale blend base getting ready to cost me $14 at Sweetgreen pic.twitter.com/fGNoUj63bV

lettuce getting ready to give people e coli pic.twitter.com/70bK153LxA

Pickles right before getting removed from a hamburger. pic.twitter.com/JsuyW8zhNq

Money getting ready to leave my bank account pic.twitter.com/APFVZD0j8Z

Saldana probably didn’t anticipate the love that her video got, but these reactions are gold. Or, should we say, green?