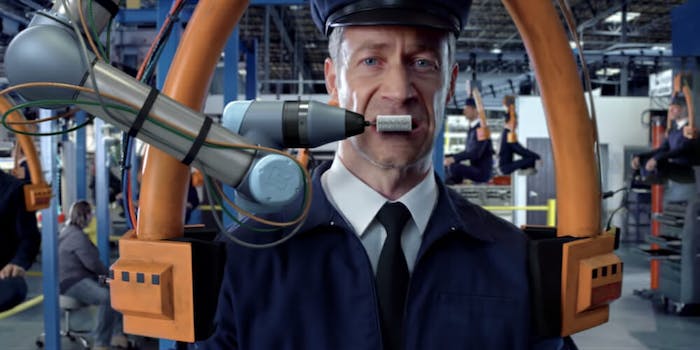 Maytag steals NSYNC meme for appliance commercial—and everyone loves it

But is it effective?

Maytag is using a reimagined version of the “It’s Gonna Be May” meme to sell its appliances in a new commercial. But is it effective?

The appliance company’s commercial for the campaign begins with NYSNC’s 2000 bop “It’s Gonna Be Me.” It’s set in a manufacturing plant and features an assembly line of doll-like Maytag men, much like the doll versions of the NSYNC boys in the original video.

Brands have to use memes tactfully. Oftentimes, when a brand tries to use a meme for self-promotion, it comes off as cheesy and could be a sign that the brand is helping render the meme uncool or defunct.

That doesn’t seem to be the case here. Many on Twitter are finding Maytag’s marketing tactic brilliantly hilarious.

oh my god. it is not often I really appreciate an ad, but #itsgonnabemaytag is…. sort of extremely brilliant

I only wish #ItsGonnaBeMaytag was created sooner. Pure brilliance!

The campaign is tailored toward millennials who are forever NYSNC stans and have a basic understanding of the cult-classic meme—or any meme, for that matter. But are millennials even in need of new home appliances? Everyone knows that they don’t own homes. Maytag doesn’t seem worried, though.

“Millennials are a key demographic for appliance purchases both today and for the future,” said Maytag’s senior director of brand marketing, Robert Sundy, in a statement to the Daily Dot. “It’s critical to build relationships early with consumers and we hope younger audiences see this campaign and think of Maytag when they are in the market for kitchen and laundry appliances.”

Even though people on Twitter find the advertisement hilarious, it’s too early to say if it’s making people run off to their nearest Sears to purchase a Maytag appliance. It’s definitely making people want to buy one, though.

Props to @MaytagBrand for the ingenious #ItsGonnaBeMaytag marketing. Makes me wish I needed to buy appliances

I am so impressed with this marketing campaign that it makes me want to purchase a Maytag washer for no reason other than to celebrate their genius. 👏#ItsGonnaBeMaytag https://t.co/4BpPKjUTNa

The commercial is being smartly advertised right before the actual “It’s Gonna Be Me” music video on YouTube, which is sure to see a spike in views on April 30, the unofficial day for the meme. It’s also being featured on Hulu.

Maytag got some of the NSYNC boys to promote the advertisement across their various social media channels.

The meme comes from the moment in NSYNC’s song when Justin Timberlake sounds like he’s singing “It’s gonna be May” instead of the real lyrics, “it’s gonna be me.” Circa 2012, someone posted a photo of Timberlake on Tumblr with the words “It’s gonna be May” plastered across it, according to Know Your Meme. Thus, the meme was born, and it was only a matter of time before a brand hopped on that meme train.