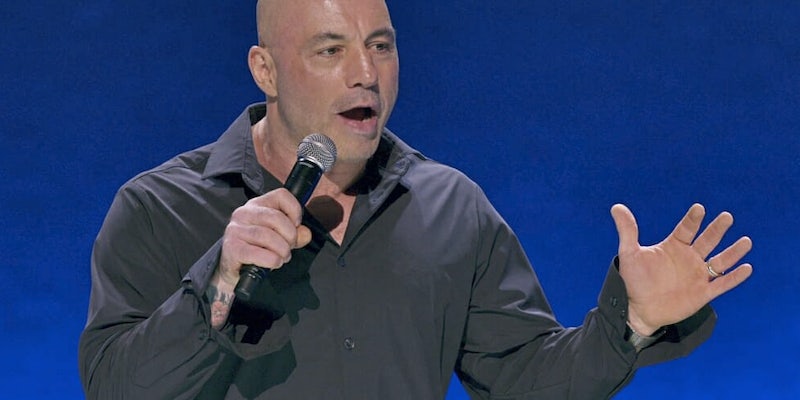 His fans don't seem to care.

Joe Rogan hosted The Man Show for 26 episodes in the early part of this century, and he’s the best known UFC color analyst in the game. So, perhaps it’s not surprising that Rogan—who was called “the Rush Limbaugh for meatheads” in a 2017 Medium article—would have vastly more male guests on his podcast. But the latest figures are ridiculous.

According to a study completed by Media Matters, Rogan, who has hosted the Joe Rogan Experience podcast for the past decade, had 91 percent male guests during a 142-show run over the span of 10 months. Media Matters reported that from June 26, 2018, to April 3, 147 of Rogan’s 161 guests were men. Only 14 were women.

For a podcast that’s one of the most popular on the Apple charts, that’s a stunning lack of diversity.

Rogan has been criticized for promoting conspiracy theories (he’s said he doesn’t believe U.S. astronauts landed on the moon, though he’s since backtracked on the issue); for introducing far-right figures like Jordan Peterson, Alex Jones, and Milo Yiannopoulos to a more mainstream audience; and for mocking transgender people.

Many of Rogan’s fans, though, didn’t seem to care about Media Matters’ findings.

Hey @joerogan I've ovulated for a long time & I think you are fantastic. If #MediaMatters have their knickers in a knot about you / your guests / the boxes ticked by your guests, then that's their problem. Fuck'em.
Keep up the good work. https://t.co/XgJBPhla09

Fortunately the JRE is completely independent and Joe has that f**k you money that means he need not pay attention to accusations like this. It's almost gratifying to see it become a target because it means it is becoming a real alternative media force.

Tucker Carlson also came to Rogan’s defense. “It doesn’t matter that it’s his program,” the Fox News host said on his program. “He can invite on whomever he wants. It doesn’t matter this his fans are obviously happy with his program. More people listen to Joe Rogan than watch anything on CNN or MSNBC … If you ask Media Matters, they’d say they’re upset because Rogan doesn’t care about diversity. Of course, the truth is exactly the opposite. Rogan is popular because he welcomes a diversity of opinion.”

Media Matters calls itself the “nation’s premier progressive media watchdog,” and it notes that Rogan’s podcast was the second-most downloaded show on Apple in 2017 and 2018.