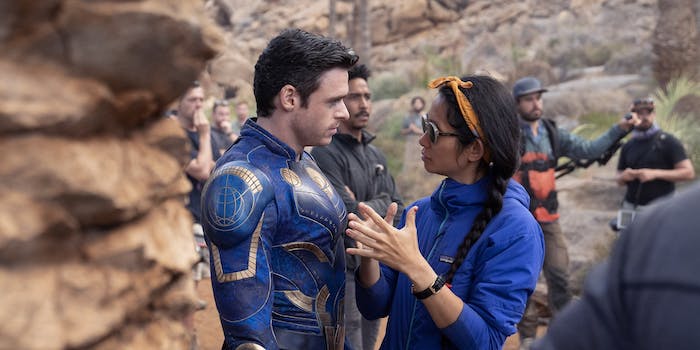 It's the first MCU film to be deemed 'rotten'.

Just to get this out of the way before we begin: Rotten Tomatoes scores are not a scientific measurement of artistic quality. Plenty of beloved movies were panned by critics when they came out, and that didn’t stop people from loving them. And in terms of overall accuracy, Metacritic offers a more nuanced view than Rotten Tomatoes. RT just calculates a percentage of positive versus negative reviews.

All that being said, Rotten Tomatoes is the internet’s favorite way of judging a film’s critical acclaim. And Eternals is the first MCU film to earn a “rotten” score, clocking in at 53%. This embarrassing critical consensus means that only half the reviews were positive, whereas most MCU movies reach at least an 80% “fresh” score.

Eternals‘ negative critical response has earned some pushback in MCU fandom, in a similar way to how DC fans struck back at critics who panned Justice League. Many people are very attached to the MCU brand, leading them to defend a film that isn’t actually out yet. Some also believe that Eternals attracted negative reviews due to its diverse cast, with critics allegedly being skewed by racism and homophobia. This is a recurring concern because film criticism is dominated by white men, and certain biases can shine through in reviews—for instance, Vulture‘s top film critic publishing an extraordinarily sexist review of Wonder Woman.

Unspoken biases may have influenced some Eternals criticism, but at the same time, it’s hard to blame bigotry for the film’s overall RT score. Earlier this year, Marvel’s Shang-Chi and the Legend of the Ten Rings earned glowingly positive reviews; a superhero movie with a majority-Asian cast. Black Panther is the MCU’s most acclaimed film to date, and Eternals director Chloé Zhao literally won an Oscar last year. Her non-Marvel movies have earned universal praise.

So while we’ve all seen examples of racist backlash against popular movies (hello, Star Wars), there’s no evidence for a widespread critical bias against diverse casting in the MCU. Never mind the fact that plenty of superhero movies about white men have earned far worse reviews: Batman v Superman, Green Lantern, Venom.

Eternals is the first real test of the MCU as a critic-proof brand, and so far it seems likely to succeed. Hardcore MCU fans aren’t swayed by bad reviews (in fact, some fans are actively angry about them), and general audiences are buying tickets in droves. Eternals is predicted to have a $75 million opening weekend in the U.S., beating Dune‘s recent $41 million; another A-list blockbuster with a diverse cast. So while Eternals‘ reviews are disappointing, it’s still a commercial success.