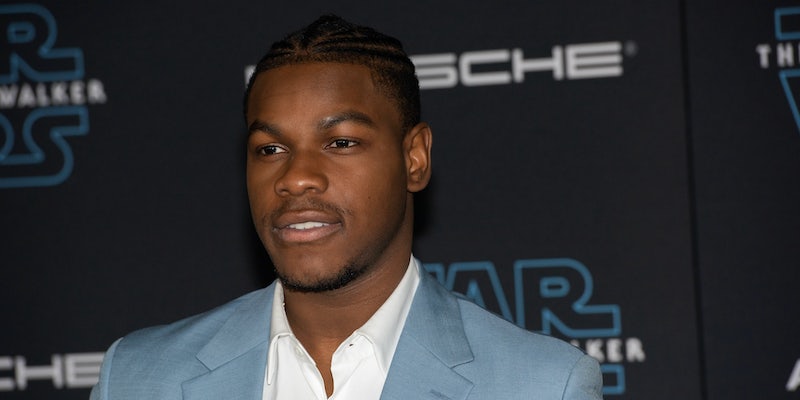 John Boyega opens up about his ‘Star Wars’ experience: ‘Everybody knows’

'I’m the only cast member who had their own unique experience of that franchise based on their race.'

John Boyega gave a passionate speech at a Black Lives Matter protest in June, prompting widespread support across Hollywood after he said he wasn’t sure if he’d still have a career after speaking out on systemic racism. Months later, Boyega is opening up about that speech as well as working on the Star Wars sequel trilogy.

In an in-depth interview with British GQ published Wednesday, Boyega revealed what happened behind the scenes that day. For one, he said, he wasn’t planning to speak at the Hyde Park rally; he attended it with his sister and planned to march in anonymity and in solidarity with Black Lives Matter. He had been in contact with the event’s organizers earlier in the week, and after meeting up with them, they asked him if he would speak while they waited for the next speaker. Boyega agreed.

“I feel like, especially as celebrities, we have to talk through this filter of professionalism and emotional intelligence,” he explained. “Sometimes you just need to be mad. You need to lay down what it is that’s on your mind. Sometimes you don’t have enough time to play the game.”

At the time, Boyega voiced worry about whether or not he would ever work in Hollywood again for speaking up about systemic racism, which actors and directors alike assured him wouldn’t be the case. But he’s seen firsthand how Hollywood can treat Black actors and other non-white actors in major franchises.

Boyega has never shied away from criticizing aspects of the Star Wars universe and his experience making it. He was openly critical of how Finn was sidelined in The Last Jedi during the Rise of Skywalker press tour, and since The Rise of Skywalker was released, and on social media, he’s been honest and critical in a way we’re often not used to seeing from franchise stars. As he revealed to British GQ, that honesty extends to how Lucasfilm and Disney treated several of the sequel trilogy’s non-white characters and the actors who played them like Oscar Isaac, Kelly Marie Tran, and Naomi Ackie.

“It’s so difficult to manoeuvre,” Boyega said. “You get yourself involved in projects and you’re not necessarily going to like everything. [But] what I would say to Disney is do not bring out a black character, market them to be much more important in the franchise than they are and then have them pushed to the side. It’s not good. I’ll say it straight up.”

Despite how you might feel about the Star Wars sequel trilogy, it’s easy to see where Boyega is coming from. He pointed to the marketing of Finn in The Force Awakens as an example. Finn, who held Luke Skywalker’s blue lightsaber in marketing and the trailers, made people who might not have been interested in watching a Star Wars movie go and see The Force Awakens. It’s now one of the highest-grossing movies of all time, but it comes with a major caveat for Boyega’s Finn: The marketing was essentially a ruse to hide that Daisy Ridley’s Rey—and not Finn—was the Force-wielding Jedi in the making. And then The Last Jedi pushed Finn to the sidelines as the film focused more on the connection between Rey and Kylo Ren; even giving Finn more to do and making him Force-sensitive in The Rise of Skywalker couldn’t save what had already been done.

For Boyega, his frustrations on making the Star Wars sequel trilogy also came with years of racist messages, death threats, and calls to boycott The Force Awakens simply because a Black man was cast to play a former stormtrooper. While he might have laughed them off publicly, it clearly affected him.

“I’m the only cast member who had their own unique experience of that franchise based on their race,” Boyega said. “Let’s just leave it like that. It makes you angry with a process like that…Nobody else in the cast had people saying they were going to boycott the movie because [they were in it]. Nobody else had the uproar and death threats sent to their Instagram DMs and social media, saying, ‘Black this and black that and you shouldn’t be a Stormtrooper.’ Nobody else had that experience. But yet people are surprised that I’m this way. That’s my frustration.”