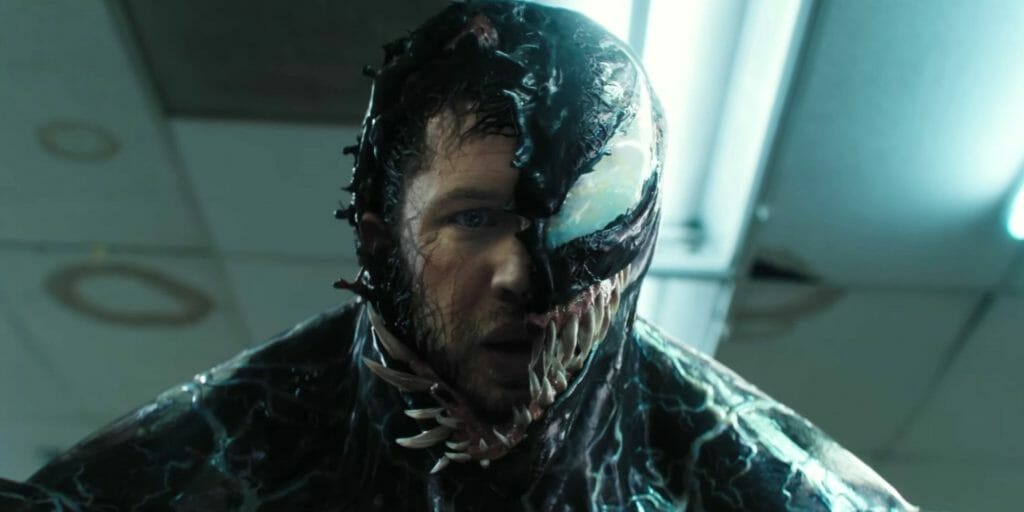 Ignore the haters—‘Venom’ is hilarious

'Gritty and grounded'? Forget it. This movie is hilarious.

Venom is a 70-30 split between intentional and unintentional hilarity. With Tom Hardy given free rein to be as twitchy and slapstick-disastrous as he wants, it’s hard to believe this movie came out in 2018. That’s partly because it belongs in the corny mid-2000s era of Catwoman or Tobey Maguire’s Spider-Man, and partly because it’s so aggressively ridiculous—a far cry from the calculated Marvel Studios formula. The overall vibe is akin to the Nic Cage movie Vampire’s Kiss; the one where Cage insisted on eating a real, live cockroach.

The most dated element is Venom’s by-the-book origin story structure, starring Tom Hardy as reporter Eddie Brock. He gets infected by an alien symbiote while investigating an evil scientist’s lab, and instead of just gaining superpowers, he gets a second personality. The Venom symbiote now shares Eddie’s body, usually depicted as an invisible voice in his head, but occasionally emerging as a fanged monster with a penchant for human flesh. There’s no attempt to make this premise any less silly than it sounds, offering a comically shallow view of journalism even by Hollywood standards. Eddie Brock is a motorbike-riding news vlogger whose investigative skills consist of snooping in his girlfriend’s email and ham-handedly asking pharmaceutical CEO Carlton Drake (Riz Ahmed) if he’s killing people in secret drug trials. When Drake responds by having Eddie thrown out of the building while still on camera instead of politely deflecting the question, you know precisely what kind of movie you’re watching: A stupid one.

Grimacing manically and dripping with flop-sweat, Hardy gives the antithesis of a modern superhero performance. For one thing, he doesn’t even look like he worked out for the role, which is honestly refreshing. And while Eddie Brock has angst, it’s trashy angst. He ruins his own career and relationship in the first act of the movie, so he’s already a mess before Venom shows up. That’s why the story works. When Spidey got possessed by Venom (in the comics and in Spider-Man 3), it’s horrifying because we don’t want sweet little Peter Parker to be engulfed by a murderous alien. But here, we have no particular investment in Eddie’s wellbeing. You can simply sit back and enjoy the ride of Tom Hardy shrieking while Venom decapitates people and growls bad advice in his ear. Michelle Williams co-stars in a generic Girlfriend Role as Eddie’s ex-fiancee Annie, salvaged by one mitigating factor: When she gets a new boyfriend, he’s portrayed as a likable person, and Eddie treats him with respect. (In the world of Hollywood blockbusters, a sadly rare dynamic.) To be fair, it would be a hard sell to suggest she’s better off with Eddie, a guy whose main hobbies are homicide, unintelligible yelling, and guzzling frozen Tater Tots straight from the bag.

Director Ruben Fleischer described this malarkey as a “grittier, grounded” version of Eddie Brock. Fans hoped to see an R-rated psychological horror take on the comics. Clearly, this didn’t happen, but I’d argue that Venom’s creative team (Fleischer and writers Jeff Pinkner, Scott Rosenberg and Kelly Marcel) still have a decent handle on what makes Venom tick. They just opted for a comedic tone, allowing Tom Hardy to improvise wacky scenes like Eddie jumping into a tank of lobsters. It may not be gritty, but it’s still a story about Eddie and Venom deciding they’re better off together; a central theme of the comics.

Echoing Eddie’s American colloquialisms (Hardy gifts us with another unique Tom Hardy Accent here, incidentally), Venom explains that on his own planet, he’s “kind of a loser.” So for all that Venom loves to call Eddie a pussy and hijack his puny human body, he sees Eddie as a kindred spirit. It’s a Jekyll-and-Hyde story where Jekyll and Hyde realize they’re actually into each other. Fans of the romantic/sexual subtext in the comics will most likely be satisfied. While Venom is low on body horror, it offers a different but equally kinky take on Venom and Eddie’s partnership, with Eddie masochistically sticking around for Venom’s insults, orders, and (eventually) supportive reassurances.

For me, Venom succeeded at what Suicide Squad failed to do: deliver an enthusiastically weird superhero spinoff with an edgy-but-funny lead. Sure, much of Venom is clunky or derivative (the fight scenes are Whatever, the worldbuilding is paper-thin, and Michelle Williams’ wig is truly inexplicable), but I thoroughly enjoyed myself. Compared to the tiresome prospect of another Doctor Strange movie, I’d happily return for more Venom buddy comedy antics where Tom Hardy trash-talks his own internal monologue and makes out with himself. Just don’t make me sit around for Eminem’s credits rap, where he half-assedly rhymes “Venom” with “when I’m” and “go get ’em.” For the love of God, why? It’s not actually 2003.