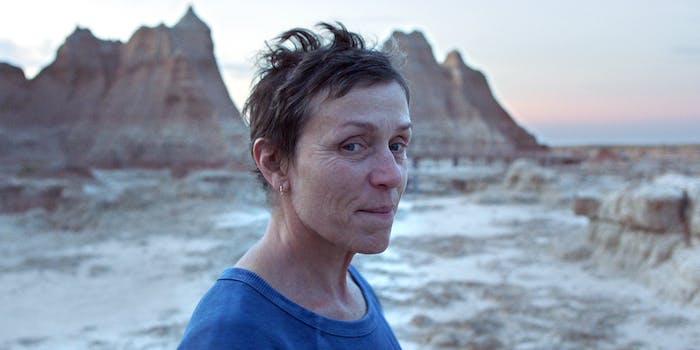 ‘Nomadland’ is an intimate character study across a different America

Nomadland, Chloé Zhao’s grand portrait of an America that left behind many of its own, is fascinated by the minutiae. We watch Fern (Frances McDormand) go through the motions, sometimes in painstaking detail, at the various jobs she holds. We see her boxing up items at an Amazon warehouse, scrubbing dirty bathrooms and fixing electrical issues at a campsite in the Badlands, preparing food and cleaning up in the kitchen of a restaurant, even shoveling beets during a harvest.

RELEASE DATE: Dec. 4, 2020
DIRECTOR: Chloé Zhao
STREAMING: Hulu
‘Nomadland’ follows a year in the life of a woman who refurnishes a van and lives on the road after her husband’s death and her small town is wiped off the map. It’s an intimate character study, one that’s strengthened by both Frances McDormand’s performance and Chloé Zhao’s direction.
Advertisement Hide

Both McDormand and Zhao—who wrote, directed, and edited Nomadland—take us along for the ride as if we’re a passenger living inside of the van she calls home (and which she named Vanguard). And at times, Nomadland blurs the line between fact and fiction. It’s based on Jessica Bruder’s nonfiction book and the cast largely consists of non-actors. McDormand fades into the woodwork (something that’s not always easy to pull off when you’re Frances McDormand) with a quiet yet masterful performance as Nomadland repositions the rearview mirror to show us a different side of America.

Many of the travelers that Fern encounters on the road are older, the kinds of people that society wishes it could cast away without a second thought; oftentimes, it does. Some of them lost their jobs or their homes in the Great Recession. Some of them have a spark to cast their familiar lives aside to live life to the fullest. Some of them want to spend the last months or years of their lives outdoors instead of inside a stuffy hospital room. One traveler, a woman named Linda May (who featured prominently in Bruder’s book), explained to Fern that at age 62, she looked up her social security to see how much she’d get once she retired. She was horrified to learn she’d only receive $550 despite having worked since she was 12; as a traveler, she seems to thrive.

Fern once had a home in Empire, Nevada, where nearby gypsum mines were closed in January 2011 due to a lack of demand for sheetrock; six months later, Empire was essentially rendered a ghost town after the discontinuation of the town’s zip code. She once had a home in her husband Bo, whose death haunts her (and whose possessions she still clings onto from afar in a storage unit); she wonders if she should’ve let him go sooner.

Retiring, or even just getting off the road and living quietly at home, is what some of the people in Fern’s life hope she’ll accept, but it’s also an offer she cannot take. They offer Fern a place to stay, a gesture that’s well-intended, but they struggle to hide the pity on their faces as they do so. “I’m not homeless, I’m just houseless,” Fern explains to a girl she once tutored after declining her mother’s invitation. After a while, even being under a roof just feels wrong; at one point, Fern sneaks out of the nice guest room she’s sleeping in for the comfort of Vanguard.

She’s found a home in her trusty Vanguard, which is as faithful as ever (except when it isn’t, as most cars are). And she’s found a home among the travelers like Linda May, who points her in the direction of a community; like David (David Strathairn), whose unrequited crush on Fern lingers but never overwhelms; like Swankie, whose mind is clearer than its ever been now that she knows where her life will take her; and like Bob Wells, the founder of the Rubber Tramp Rendezvous (an annual gathering of travelers just outside Quartzsite, Arizona) who offers decades of wisdom and advice in the form of his own gospel. (Like many of the travelers, van dwellers, and nomads throughout the film, Linda May, Swankie, and Bob Wells all essentially play versions of themselves.)

At the RTR, travelers trade stories, give each other sound advice like preferred methods of relieving oneself or the necessity of carrying a spare tire, and they listen to Bob Wells speak as he compares travelers to workhorses put out to pasture who then gather to take care of one another. (He also compared the uncertain economy in the wake of the Great Recession to a sinking Titanic.)

Nomadland is a sprawling and intimate character study that’s largely internal but appears larger than life with the grand sweeping cinematography that captures the vast beauty of America without obscuring the grit; Ludovico Einaudi’s ethereal music highlights it even further. We’re right alongside Fern as she looks over the few possessions and keepsakes she brought with her and a vast array of emotions, each more complicated than the next, flash across her face. We can sense her losses (both material and personal) along with the change in routine that she never comments on but we notice even more profoundly. Much of it is presented matter-of-factly. It’s often not glamorous.

But the world that Zhao shows us and in which McDormand moves around feels rich in detail and character. “What’s remembered lives,” Fern says at one point, quoting something her father used to say; she adds that she spent too much of her life just remembering. And yes, Fern does plenty of remembering in Nomadland as she clings to those last remnants of the life she left behind. But the longer she’s on the road, the more she’s starting to do a bit of living, too.

Nomadland is now streaming on Hulu.