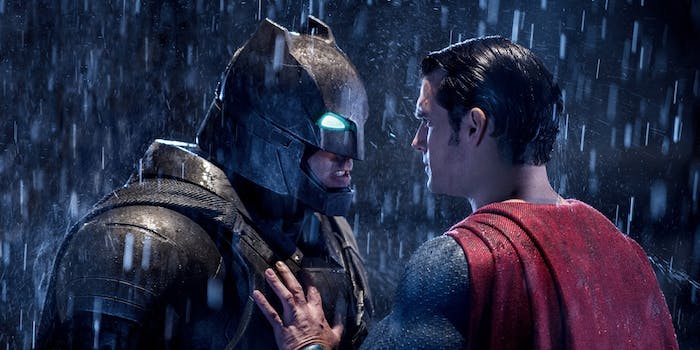 ‘Batman v Superman’ is one of Hollywood’s most fascinating failures

Hidden somewhere in the first hour of Batman v Superman, there’s a kernel of something interesting. A nihilistic look at the romance of the DC Comics mythos, recasting Batman and Superman as vengeful, petulant gods. But by the end of the film’s near-unwatchable final battle, any hope of nuance or intentional subtext had been snuffed out by hours of ugly CGI and pulverized debris.

It’s hard not to sigh at director Zack Snyder’s insistence on opening the film with the death of Bruce Wayne’s parents, a scene that cowriter David Goyer already retold once before in Batman Begins. There’s no real need for it, but this time, there’s a twist in the dream sequence. When young Bruce Wayne falls into the Batcave, he escapes by floating messianically toward the sky, borne aloft by a flock of bats.

It’s an undeniably silly piece of imagery, but it speaks to the surreal nature of Batman as a character—something that Tim Burton understood in his mature but operatically weird 1989 Batman. However, this brief foray into superheroic romance is quickly obliterated by the first appearance of Ben Affleck‘s Bruce Wayne, caught in the midst of Superman’s brawl with Zod in Man of Steel. As he runs headfirst into clouds of concrete dust to pull people from the wreckage, we’re forced to confront the fact that yes, Zack Snyder is doubling down on his comparisons between Superman and 9/11.

This clumsy flashback kickstarts Bruce Wayne’s hatred of Superman, who has since inspired godlike worship as the world’s first publicly superpowered hero. (Oddly enough, Batman—who has apparently been on the scene for 20 years—is considered such old news that when Clark Kent wants to write an article about him for the Daily Planet, his editor squashes the story in favor of filling the sports pages.) Bruce sets out to destroy him, while the U.S. government debates whether Superman should be held accountable for the collateral damage of his superheroism.

Unlike the upcoming Captain America: Civil War, in which both sides have a thoughtful basis in movie canon and characterization, the Batman v Superman conflict is rooted in atavistic hatred and fear. It’s virtually impossible to sympathize with either Batman or Superman, because they’re both terrible people. And since Warner Bros. had to market this as a mainstream comic book movie, we may never know if Snyder and the two screenwriters secretly did intend it to be an excoriation of superheroism as a concept, forcing audiences to handle the dark side of their hunger for vigilante saviors.

In Superman mode, Henry Cavill has two facial expressions: saintly torment, and a rageful sneer that he aims at Batman, Lex Luthor, and anyone else who pisses him off. He mostly appears at a distance, symbolically, which is just as well because Cavill’s performance doesn’t even seem like a person, never mind the dual role of Superman and Clark Kent. Perhaps unintentionally, it’s a fascinating portrayal of Kal-El as a truly alien being, softened only by his possessive love for the two vulnerable human women in his life.

Meanwhile, Ben Affleck and Batman are a match made in Hell. Not for performance reasons, but because Affleck, bless his heart, seems convinced that he’s starring in a continuation of Christopher Nolan’s Dark Knight trilogy. Trapped in green screen purgatory, he imbues Bruce Wayne with as much weighty solemnity as he can manage; an impossible task in the context of Snyder, Goyer, and cowriter Chris Terrio’s soul-crushing lack of self awareness. These men all clearly take Batman very seriously, but they still created one of the greatest moments of unintentional comedy this year: Bruce Wayne’s overblown workout montage, hauling truck tires through the Batcave and doing shirtless chin-ups with giant metal chains around his legs.

Oh, and Batman is basically a serial killer. He and Superman both have a shockingly high body count, but Batman is the one who really seems to enjoy it. As well as shooting, stabbing and blowing people up, Batman leaves a monstrous calling card: burning his logo into the skin of the “worst” criminals he apprehends, leading them to be assaulted or killed by their fellow inmates in jail. This is the point where Batman v Superman‘s attitude to violence really becomes a problem.

When I first heard that Batman v Superman would receive an R-rated director’s cut on Blu-ray, I laughed. Now, I can only assume that the theatrical version received its PG-13 rating on a technicality. It may not include enough outright gore to warrant an official upgrade to R, but the violence is brutal and constant. Everyone involved in this film suffers hours of pain, from the heroes to the audience to whoever played the screaming electric guitar solos during the action sequences.

Unlike some ultraviolent superhero adaptations (Blade, Daredevil, Deadpool), it’s hard to understand the rationale behind Batman v Superman‘s persistent physical torture and moral ugliness. The message doesn’t seem to be “violence is painful to watch, and therefore morally bad,” or even, “violence is a necessary evil.” It’s more like, “Violence is what you’re getting for two and a half hours, and there’s nothing you can do about it.” The action sequences are dull, fake, and poorly shot, and don’t remotely compare to the clear visual storytelling of or the aesthetic appeal of an efficiently murderous action movie like John Wick.

It’s nothing short of astonishing that in a film saddled with such a clunky script, the talking scenes are significantly more watchable than the action. At least Ben Affleck manages to give Bruce Wayne some personality, even if that personality is so twisted that it’s impossible to imagine how Snyder’s upcoming Justice League could present him as a hero. Wonder Woman, at least, is great. Gal Gadot’s sporadic appearances are a brief respite amid the chaos, although the other Justice League characters are foreshadowed using a method so contrived it would surely be rejected even on the cheesiest of superhero TV shows. On the bright side, Jason Momoa’s silent 30-second cameo as Aquaman, hair billowing gorgeously in the ocean, had more personality than Cavill’s entire role from beginning to end.

In a film full of charmless heroes and thankless supporting roles (pour one out for poor Amy Adams), Jesse Eisenberg was the only actor who really lucked out. His dialogue may have been an incoherent jumble of aphorisms and megalomaniacal speeches, but he sold it. And unlike Affleck or Cavill, he didn’t have to spend weeks being flung around in front of a green screen.

Even Lex Luthor’s melodramatic theme music was fun, which speaks to the wildly uneven tone of the movie as a whole: Hans Zimmer’s pompous classical strings one moment, segueing into Junkie XL’s grinding roar for the action sequences. It’s the auditory equivalent of Zack Snyder’s aesthetic for the final battle scene, where Luthor’s Doomsday monster appeared as a giant turd and spewed lightning for half an hour while Batman and Superman smashed a building to smithereens. (By the way, if this film really wanted to be gritty, then Bruce Wayne would have lost several teeth in the fight. His Superman-proof armor covered every part of his body except his mouth, making it preposterously vulnerable to superhuman punches and falling masonry.)

The main thing I can say in Batman v Superman‘s favor is that it’s interesting. It’s a trainwreck, but it’s the sort of trainwreck that rarely gets made on such a grand scale any more. Studios are too cautious to take this much of a risk, and it’s almost refreshing to see something so catastrophically weird emerge from such a formulaic genre. It’s just too bad that it was borne from Zack Snyder’s panicked desire for a DC Comics legacy, stewed in a miasma of masculinity crises and distasteful visual effects.

Snyder recently characterized Batman v Superman as a spiritual successor to his 2009 Watchman movie—and he may well be right, although perhaps not for the reasons he hopes. With the exception of its rewritten ending, Watchmen was a painstakingly direct adaptation of a book that explicitly critiqued the superhero genre, its violence, its morality, and its place in American pop culture. As a movie about the two most beloved characters in superhero comics, Batman v Superman is going to inspire precisely that kind of critique, which will hang over the franchise for years to come.

If you’re not convinced of just how weird this film is, consider the unexpected amount of horses in it. Seriously, there were like four different horse moments. It’s a mesmerizingly strange and unpredictable movie.

that film had a lot more horses in it than i was expecting. #BvS

There's a bit in Batman v Superman where Clark Kent (basically) says to his dead father, "Have the horses stopped screaming yet, Clarice?"