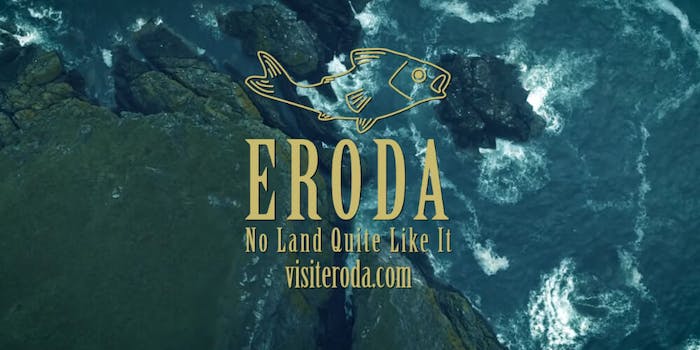 The conspiracy theories are running rampant.

A nonexistent place called “Eroda” has the internet abuzz after Twitter and Reddit users noticed the ads they were seeing on their social media feeds were enticing them to visit a travel destination that doesn’t seem to appear on any map.

“Hi so i just got an ad on twitter for a place that, as far as i can tell, straight up DOES NOT EXIST,” Twitter user @TheBrotographer wrote, beginning their five-part thread on Eroda.

TheBrotographer wrote that they were scrolling through Twitter and stumbled upon the ad. “Y’all know i love looking at pretty pictures of places i can’t afford to visit so i decided to take the bait and check out this place i had never heard of,” they wrote.

i was scrolling through twitter and this ad popped up and y'all know i love looking at pretty pictures of places i can't afford to visit so i decided to take the bait and check out this place i had never heard of pic.twitter.com/Q1I0ZchC5d

i decided to go to the website to try and find more info and even the WEBSITE doesn't say anything about WHERE TF THIS PLACE IS pic.twitter.com/Jsj0MIu1x6

Other users are similarly perplexed.

“I’m freaking out right now,” Twitter user @phuckfas wrote. “I think I stumbled into an ARG or something.”

Eroda, whose motto, “No land quite like it,” appears to reference the fact that it literally doesn’t exist, and it isn’t just buying social media ads. It also has accounts on Facebook, Twitter, Instagram, and recently put out an eerie youtube video mimicking a real travel ad that seems to be teasing internet users who are following its every move.

“Do you remember smelling the fresh air off the coast of Eroda?” the ad asks. “No? Make memories for your senses.”

The ads all lead to Eroda’s website, which also leads to dead ends and even more questions. The domain for the website is linked to a software company that could not be reached by the Daily Dot for comment. But even stranger, is the mysterious lore that has internet users theorizing the elaborate campaign could be to promote an upcoming alternate reality video game.

When asked about the mystery surrounding Eroda, one of Eroda’s “social media partners” pointed the Daily Dot to the “Attractions” section of its website for more “information on travel and lodging.”

They have not yet responded to the Daily Dot’s inquiry on whether Eroda is a real place.

The attractions portion of the website promotes a pub called “The Fisherman’s Pub.” Under its description is a weird quip about one of the only rules of the bar: “Don’t mention a pig in the pub.”

“A lot of the weird descriptions seem like it’s for a game. Maybe it’s a setup to tie to a game?” one redditor theorized.

Some popular theories are that the campaign is an elaborate school project or some kind of front for illegal business dealings.

“Maybe i’m cynical but my first thought went to illegal crimes/trafficking. anybody else?” another Reddit user theorized. “But i’m really hopeful that it’s just an outlandish way to promote a new game.”

But, so far, there doesn’t seem to be many solid leads on the mystery.

Update 10:30pm CT, Nov. 24: When reached for comment, Cadabra Games told the Daily Dot it was not affiliated with Eroda.