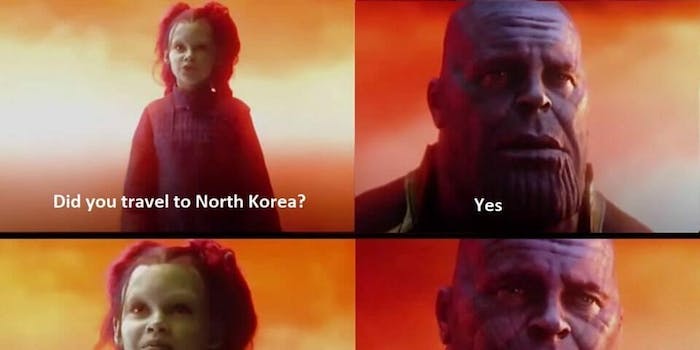 The United States government does not recommend you visit North Korea. The State Department lists the nation, officially known as the Democratic People’s Republic of Korea, as a level four threat, or “Do not travel” (their highest warning) “due to the serious risk of arrest and long-term detention of U.S. nationals.”

The United States also has no embassy in North Korea. The U.S. relies on the Swedish government for help when problems arise with American citizens, but again, according to the State Department, “The North Korean government routinely delays or denies Swedish officials’ access to detained U.S. citizens.”

That being said, the country can’t stop you from going to North Korea. A 2012 Los Angeles Times article reported that travel agencies estimated that anywhere from 4,000-6,000 western tourists visit North Korea every year, although it seems likely that escalating tensions and the threat of nuclear war have had an effect on those numbers.

Maybe that’s why a travel agency called “Visit North Korea” is trying a new approach to drum up tourism. It’s begun using memes to catch people’s attention and tell them how cheap, and safe, a trip to the DPRK can be.

Interestingly enough, Thanos, the mad Titan who wants to kill half of all life in the universe, seems to be their top choice for memes.

Not surprisingly, people are responding to these posts with memes of their own.

Because North Korea maintains tight control over anyone visiting the country, it’s likely that Visit North Korea is either being directly or indirectly controlled by the North Korean government. If you book a trip with them, you also won’t be allowed to go wandering around on your own. A visit to North Korea is a highly regimented ordeal and westerners must remain with official tour guides at all times.

According to the agency’s website, “Visit North Korea provides expert-led travel with an emphasis on engagement in the world’s most secretive country. Our high quality, affordable North Korea tours offer a unique, objective and priceless experience guaranteed to leave an impression.”

This is especially true if you end up spending time in one of their famous North Korean prisons.