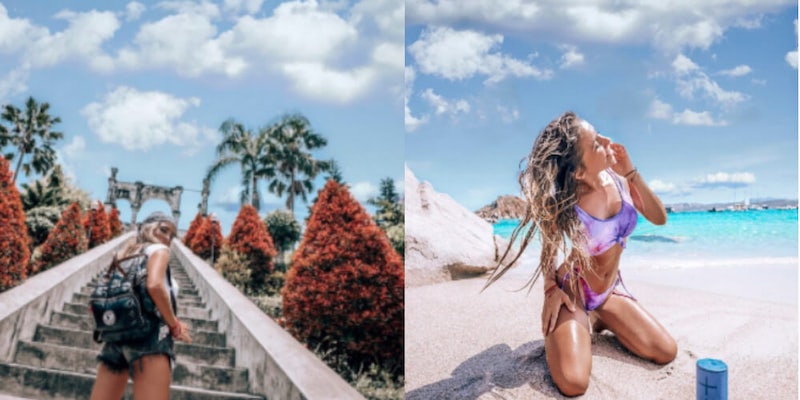 Travel influencer called out for Photoshopping clouds into her photos

'Those clouds are loyal followers.'

Travel influencer Tupi Saravia–known as tupisaravia on Instagram–is being called out for Photoshopping clouds into her photos.

Matt Navarra pointed out on Twitter how Saravia “spookily has the same clouds in every photo” and included some of Saravia’s photos to illustrate. Sure enough, Saravia does have the same exact cloud pattern in her photos, implying she Photoshops them in.

Even though altering photos with the help of Facetune and Photoshop is looked down upon, it is a common practice and somewhat normalized. Celebrities are caught in Facetune blunders all the time; the Kardashian-Jenner clan alone are frequently called out after fans notice missing limbs and bent walls in their photos.

Influencers typically alter their photos to make themselves appear slimmer, curvier, tanner, or any other physical alteration you can think of. Photoshopping clouds is a new one, though.

“To be serious for a sec, isn’t this kinda strange behaviour? It goes to prove that the digital world and the real world really are night and day. I’m becoming more and more cynical (getting old!!) towards online ‘influencers’ – I think it’s a bubble, that will eventually go pop,” Twitter user Simon Murdoch wrote.

Now was obviously the time for anyone sitting on their cloud-influencer jokes to whip them out.

Those clouds are loyal followers ☺️

After the Photoshopped clouds allegations, Saravia made her Instagram account private. She did, however, seem to be taking the whole thing in stride. Scott Buscemi posted on Twitter that Saravia poked fun at herself by Photoshopping lightening and memes of herself into the sky.

She posted this on her story hahahah pic.twitter.com/gHk5fYRt4g