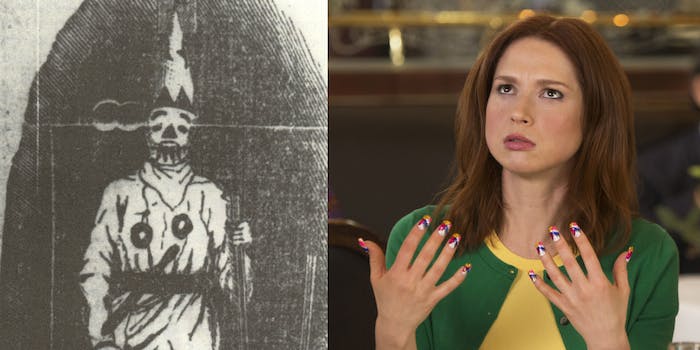 She was the Queen of the 'Veiled Prophet Ball' in 1999, a St Louis tradition with a very racist history.

Ellie Kemper is known for her roles in Netflix’s Unbreakable Kimmy Schmidt and The Office, but she’s not the kind of celebrity we associate with shocking gossip. That changed on Sunday night after a little-known detail from her college years began to trend on Twitter. According to one very inflammatory tweet, she was “crowned KKK queen” at a beauty pageant in 1999.

The tweet shows a teen Kemper at the Veiled Prophet Ball, an exclusive St. Louis event that’s been running since 1878. It’s not literally the Ku Klux Klan, but the ball’s origins could be described as Klan-adjacent. As recently as 2015, this organization was targeted by Black Lives Matter protesters as a symbol of racist power structures in St. Louis society.

This part of Kemper’s backstory wasn’t a secret, it was already on her Wikipedia page, but outsiders might not be aware of the Veiled Prophet Ball’s dark history. The organization was created by a Confederate veteran, during a period when mystical secret societies were very much in vogue. And the original 1878 “veiled prophet” was an armed man wearing a white robe and hood. A similar outfit to the one the Klan adopted from the anti-Black propaganda movie Birth of a Nation in 1915.

According to a 2014 article in the Atlantic, the original Veiled Prophet Ball was a ritualized private event later nicknamed the VP Ball, attached to the city’s Mardi Gras-style VP Parade on the Fourth of July. The ball involves a Veiled Prophet being chosen by “a secret board of local elites,” and in turn, this prophet would choose a Queen of Love and Beauty from among the female attendees. In 1999 that was Ellie Kemper, whose father was the CEO of a bank holding company, and whose great-great-grandfather was a railroad magnate.

The first VP Balls had an overt political agenda. Coordinated by St. Louis’ upper classes, the VP organization was responding to a growing labor movement in the city. Black and white workers had recently joined forces during the 1877 railroad strike, which was violently quelled by federal troops. So while workers campaigned for fair pay and better working conditions, St. Louis businessmen were trying to consolidate their power with this luxurious, ritualized networking event. It emphasized the mystical power of the city’s white leaders, whose descendants would continue to control similar businesses for decades to come. The VP organization only welcomed its first Black members in 1979, seven years after civil rights protesters dramatically hijacked the ball and unmasked the latest prophet, a local Monsanto executive.

The situation with Ellie Kemper is more complicated than her being some kind of secret KKK beauty queen. These days, many locals don’t know the origins and political connotations of the VP Ball and parade. But that’s kind of the point.

The VP Ball represents the glossy public facade of a long-established exclusionary power structure. So for once, some viral celebrity gossip is inspiring insightful discussion on Twitter, focusing on the interconnected nature of wealth, racism, and political power in America.

During the Ferguson protests in 2014 and 2015, the VP organization was targeted by Black Lives Matter activists under the #UnveilTheProfit hashtag. The campaign accused St. Louis elites of being complicit in racist police violence, encouraging people to think critically about the corporate power behind the police. So while the ball’s public image has certainly evolved in recent years, it’s not viewed as a politically neutral event.

Ellie Kemper hasn’t publicly responded to the controversy, but we’ve reached out to her representatives for a comment.