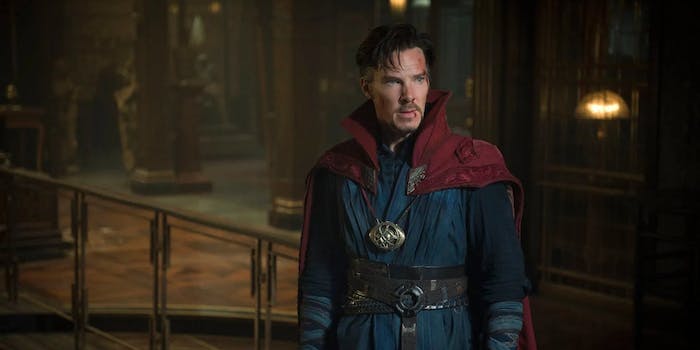 Is Doctor Strange the new Tony Stark of the Marvel Cinematic Universe?

Benedict Cumberbatch will co-star in the sequel to 'Spider-Man: Far From Home.'

Benedict Cumberbatch is joining the cast of Tom Holland‘s third Spider-Man movie, an unexpected move that puts him in a similar role to Robert Downey Jr‘s Iron Man. Is this a sign of things to come for the next phase of the MCU?

According to The Hollywood Reporter, Cumberbatch’s Doctor Strange will play a “mentor role” to the teenage Peter Parker, replacing Tony Stark who died in Avengers: Endgame. He’s a rather unexpected choice because Strange and Spider-Man aren’t really an established duo in the comics, although they did share a couple of scenes in the last two Avengers movies. It also fits with the MCU’s vision for Spider-Man, which relies on a mentor/student dynamic between the young Spidey and an older male authority figure. (In Spider-Man: Far From Home, Jake Gyllenhaal‘s Mysterio also took this role.)

Daddy issues are a recurring theme in the MCU, and Hollywood blockbusters in general. It’s clearly a winning formula, but this theme also faces criticism due to its focus on male mentors and erasure of maternal characters. In the case of Spider-Man, there’s also an interesting dynamic regarding the Sony/Marvel studio divide, and Spidey’s history in the comics.

Spider-Man is traditionally an underdog character—particularly during his younger years. The MCU’s depiction really undercut this idea, sidelining Peter Parker’s working-class roots and tying him closely to Tony Stark, including elements like an Iron Man-style robotic suit. Peter Parker (the flagship character of Sony’s Marvel franchise) is partly defined by his idolization of Iron Man (the flagship character Disney’s MCU), adding narrative weight to the corporate agreement between Sony and Marvel. That’s why Marvel fans were up in arms about the possibility of a split between the two franchises when Sony objected to Disney’s demand for a higher financial stake. By swapping Dr. Strange in as Spider-Man’s new mentor, Disney reinforces its role in Sony’s Spider-Man movies.

Earlier reports suggested that in the next phase of the MCU, Black Panther and Captain Marvel might be the new lead characters of the Avengers team, providing a connective tissue between different strands of the franchise. In theory, Black Panther might have had cameo roles in some of the earth-bound Marvel films, while Captain Marvel would appear more in the spacefaring movies. But after the tragic death of Chadwick Boseman, Marvel Studios had to make some changes to its plans.

This Spider-Man news could be the first sign of Benedict Cumberbatch stepping into Robert Downey Jr.’s shoes. And right now, it’s hard to say how that would work. The first Doctor Strange movie was a commercial success, but the character isn’t notably popular compared to other MCU stars. It kind of seems like he and Captain Marvel are the only suitable characters for a Spider-Man supporting role, since Ant-Man isn’t a good mentor figure, and the other A-list heroes (Thor and Star-Lord) aren’t based on Earth.

One possible explanation is the role of Dr Strange’s next movie, Doctor Strange and the Multiverse of Madness. As The Hollywood Reporter points out, this film—which will be directed by 2000s-era Spider-Man director Sam Raimi—will probably introduce other strands of the Marvel multiverse. This opens the door to introduce characters like the X-Men and the Fantastic Four… and Jamie Foxx’s Electro from Andrew Garfield’s Amazing Spider-Man movies, who will reportedly appear in the next Spidey sequel alongside Cumberbatch. It’s a tangled web indeed.