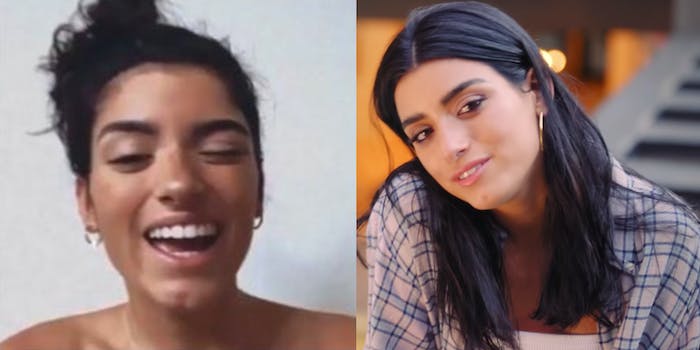 Dixie D’Amelio, a TikTok influencer, is facing accusations of blackfishing.

Use of social media apps like Instagram has prompted a rise in blackfishing accusations, as white women and women with lighter skin tones attempt to capitalize off looking more racially ambiguous or darker-skinned. Dozens of people have been accused of it over the years, from several of the Kardashians to Selena Gomez.

The accusations levied against D’Amelio point to a recent photo, in which the older D’Amelio sister’s skin appears far darker than her typical hue. Fans quickly noted the change and pleaded with her to apologize.

To drive the point home, some users compared two photos of D’Amelio. An older picture displays her clearly light skin tone, while the more recent shot taken from her Instagram story appears far darker. People that believed the blackfishing claims quickly called on D’Amelio to apologize.

One Twitter user compiled a number of tweets from fans, as they begged D’Amelio to apologize. Many fans noted that, while the shot of D’Amelio does appear darker, it could have been the result of a filter or change in lighting. Still, the calls to apologize continued until the young star appeared to acquiesce.

While it was not technically an apology, as the words “apologize” or “sorry” were never used, D’Amelio did appear to address the situation during the holiday weekend. “I never want to hurt or offend anyone. ever,” she wrote on Saturday. “I love you all and I hope y’all know I never have bad intentions ever.”

D’Amelio’s tweet may not have accomplished what it set out to do, however. Rather than shut the conversation down, it appears to have added fuel to the fire. The comment section for the tweet is home to a continued argument about whether D’Amelio did anything wrong in the first place, and if her acknowledgment can serve as an apology.

Numerous D’Amelio fans have come forward to support her. Many of them note that images from other videos shot the same day show that lighting and cameras are to blame.

Many of D’Amelio’s fans were dissatisfied with the lack of an apology, and let her know in the comments of her tweet. “I know it sounds boring, but a lot of people are offended,” one fan wrote. “I love you, but your excuses don’t seem sincere. If you know the seriousness of something you really should apologize and not do something forced.”

Many of D’Amelio’s fans are sticking by her, however, and insisting that a further apology is unnecessary. Thus far, she seems to agree. It looks like she is aiming to put the whole ordeal behind her.

We’ve reached out to D’Amelio.