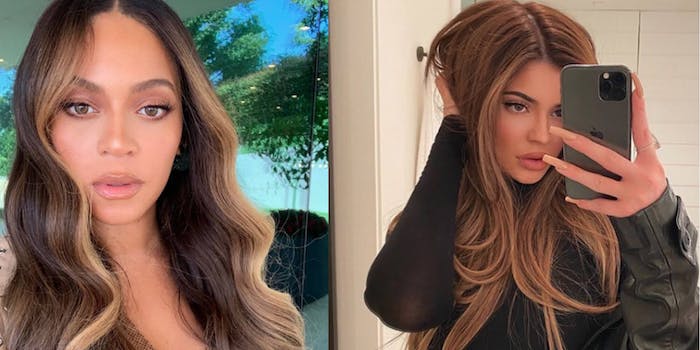 'Why are you cosplaying as Beyonce?'

Kylie Jenner is being accused of “blackfishing,” yet again.

Jenner posted pictures from her recent photoshoot to Twitter and Instagram, and many couldn’t help but point out her uncanny resemblance to Beyoncé.

In the photos, the beauty mogul sports a Tom Ford green, leopard-print leotard, has her hair styled in blonde loose frizzy curls, and has a noticeable tan.

In another photo set, posted to Instagram, Jenner can be seen in a tan jumpsuit with black crescent moons plastered on it.

Beyoncé just so happens to have the same outfit in a different color.

Both sets of photos spurred a ton of drama online, as many accused Jenner of stealing Beyoncé’s look and trying to be a Black woman.

Another called the “copying attempt” a “tragedy” and included side-by-sides of Jenner and Beyoncé.

This is not the first (and will likely not be the last) time Jenner has been accused of cultural appropriation or blackfishing. The Kardashian-Jenner clan is frequently stirring ire online by wearing Black hairstyles, like box braids, enhancing their bodies to be curvier, and wearing makeup that’s too dark for their natural skin tone.

“When will your family be done cosplaying black women?” Twitter user @QueenMiercoles questioned.

Others could only express their dismay with Beyoncé-themed GIFs.

Jenner has yet to respond to the most recent backlash.