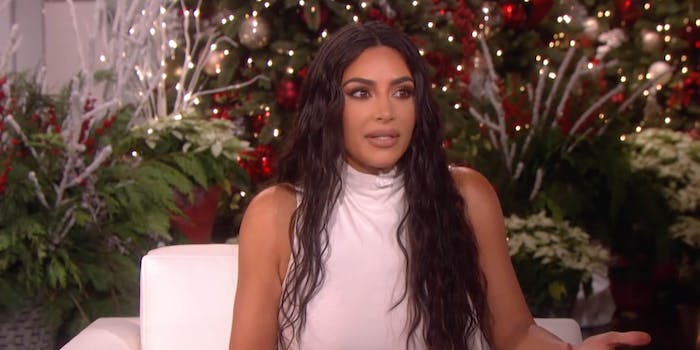 'I thought this was a Black woman.'

Kim Kardashian‘s latest magazine cover for 7Hollywood has landed her in hot water.

If channeling Taylor really was her intended mark, she seems to have missed it. People online are accusing the star of cultural appropriation and wearing blackface.

In the photos from the shoot Kardashian posted, her skin tone is noticeably darker.

Upon first glance, many users stated they thought they were looking at a Black woman.

“GIRL WHAT IN THE BLACKFACE FUCK IS THIS???” Twitter user @brownblaze responded.

GIRL WHAT IN THE BLACKFACE FUCK IS THIS???

I’M SO SICK OF YEWWW pic.twitter.com/haPnpnzn2d

Another compared her to Rachel Dolezal, the former NAACP chapter president who was exposed for being white when she claimed and appeared to be Black.

“Y’all really finna let Kim Kardashian cosplay as a black woman for the rest of her life and not say nothing huh?” Twitter user @some_girlll wrote.

Y'all really finna let Kim Kardashian cosplay as a black woman for the rest of her life and not say nothing huh? pic.twitter.com/Ex3N3L6MzT

Twitter user @vientimz believes Kardashian is exploiting her marriage to Kanye West, who is Black, and her children’s biracial status to justify appropriating the physical traits of Black women.

You dont have to do blackface pic.twitter.com/MLcJ5Hbg9R

Mere months after that accusation, she was accused of blackface yet again. She attempted to channel former First Lady Jacqueline Kennedy Onassis for a photoshoot and again missed the mark.

Kardashian’s long history of blackface, appropriating black hairstyles, and originally naming her shapewear line “Kimono” (it’s now been changed to “SKIMS”), has earned her the title of “culture vulture.”

The thing with Kim Kardashian and her family’s tireless history of cultural appropriation and Blackfishing is that she knows better. They know better. But they continue to do this because they know outrage sells. They’re able to keep their name relevant by doing things like THIS. https://t.co/rIE1fuYUXH

In addition to accusations of blackface for the 7Hollywood cover, Kardashian faces claims that she has been purchasing Instagram followers to keep up with her sister Kylie Jenner’s massive following. Kardashian and Jenner have 154 and 153 million followers, respectively, but Jenner’s follower engagement leaves her older sister’s in the dust. As reported by Radar Online, Jenner consistently receives nearly four times the likes and comments from her followers than her sister does from her own larger following.