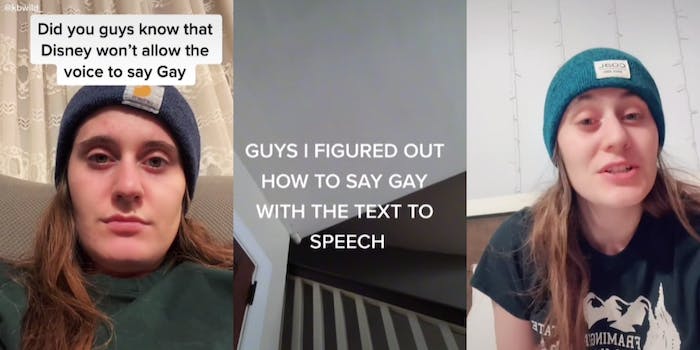 TikTokers are calling out the censorship on the app.

Disney+‘s new TikTok tie-in is pretty cool, allowing people to use Disney character voices in their posts. Of course, many of the resulting TikToks were predictably chaotic—and not especially Disney-friendly. In the words of one TikToker: “I give it about three hours tops before someone makes Stitch say a slur.”

While Disney blocked cursewords from the app, TikTokers soon found ways to circumvent the ban. So yes, you can make Disney characters use NSFW language if you spell it a different way. However, some TikTokers were surprised by which other words were blocked by Disney’s text-to-speech filter. It made sense for Disney to prevent its characters from cursing, but the feature also censored words like “gay” and “lesbian.”

“Did you guys know that Disney won’t allow the voice to say Gay?” posted TikToker @kbwild_ to her 181,000 followers, using text-to-speech for Rocket Raccoon’s voice. Rocket read most of the message aloud, but the word “gay” was left silent. The TikToker went on to test words like “queer” and “lesbian,” with similar results.

Another viral TikTok shows someone scrolling through various different text-to-speech options to test whether they’ll say the phrase “gay rights.” TikTok’s generic voices all said the word “gay,” as did the tie-in voice for the movie Scream. However, the Disney character voices couldn’t do it.

The text-to-speech voices for Disney, which has a messy history with queer representation and inclusion, arrived on Nov. 12, as a promotional tie-in for Disney+ Day. TikTokers picked up on the censorship over the next few days, and since then, the issue has been fixed. If you use the text-to-speech function now, characters like Stitch and C-3PO will actually say words like “gay” and “queer” out loud.

The Daily Dot has reached out to Disney+ for comment.