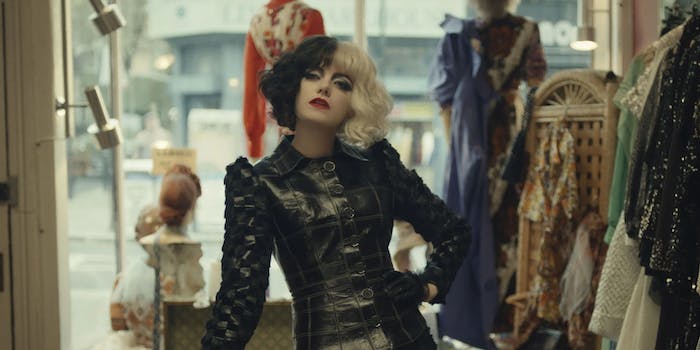 Sometimes it feels like we’ll never escape the discourse around Disney‘s “first” gay character. As Dani Di Placido pointed out in Forbes last week, we’ve already seen seven (debatable) firsts already, including a blink-and-you’ll-miss-them couple in The Rise of Skywalker and Josh Gad’s infamous role in Beauty and the Beast. Now, there’s Artie in Cruella.

According to actor John McCrea (who starred in the drag musical Everybody’s Talking About Jamie), Artie was originally envisioned as a drag queen but wound up with a David Bowie-era glam-rock aesthetic instead. He’s a minor figure in the story, running a vintage clothing store in London. And while the film doesn’t directly state that he’s queer, it’s pretty clear from his mannerisms and a conversation he has with Cruella, when she asks how people react to his appearance. “Some abuse and insults,” Artie quips. “But I like to say that ‘normal’ is the cruelest insult of them all.”

Basically, his introductory scene consists of Cruella rolling up to a total stranger and casually asking, “Hey, do you experience homophobic harassment?” Artie then becomes one of her sidekicks, helping with the fashion side of her rebellious quasi-criminal operation.

The “first gay character” cycle is partly fueled by Disney’s own PR campaigns, based around the idea that queer representation is uniquely impactful in a Disney movie. Considering Disney’s ubiquity as a brand, that’s arguably true for children’s entertainment. But it’s absurd to suggest that Artie is meaningful representation. He follows a stereotype we’ve seen in numerous mainstream films already: a flamboyantly-dressed gay man whose sexuality is rendered coyly apolitical and irrelevant. He exists to help the protagonist have a makeover. Complicating the issue, he appears in a specific setting (1970s London) where many straight men were adopting androgynous fashion choices and elements of queer culture. So he remains in the realm of plausible deniability.

Disney has a long history of included queer-coded characters in children’s cartoons, primarily villains. Ursula, Jafar, and Hades are all famous examples, and Cruella De Vil can be interpreted as queer-coded as well. She had a henpecked, subservient husband in the original novel, but the Disney adaptations portray her as single. She’s a predatory foil to Roger and Anita, a boringly wholesome hetero couple.

In the 1996 live-action 101 Dalmatians, Glenn Close’s Cruella arrives like an alien interloper in Roger and Anita’s house. Outlandishly clad in red, black and white, she sows discord into their comfortable beige existence. “Oh, poor thing!” she exclaims in disgust, when Roger announces that Anita is pregnant. She’s the natural enemy of the nuclear family, openly horrified by the idea of having a baby.

Glenn Close’s gleeful unpleasantness is very entertaining. That’s why she’s such an iconic villain. By comparison, the new Cruella is being criticized for sapping the fun out of her theatrically evil persona. The movie attempts to make her sympathetic, resulting in a widely-derided tragic backstory. Disney wanted to make a Cruella film without any sense of edginess or danger, overlapping with the studio’s milquetoast approach to gay characters.

Disney’s idea of queer representation is a character whose main role is to simply exist onscreen. In the near future, this tokenism will expand to bigger roles like a same-sex couple among the ensemble cast of Marvel’s Eternals. But above all, queer Disney characters must be as uncontroversial as possible. That’s why they have minimal narrative impact, contrasting with the problematic-yet-beloved roles for classic queer-coded villains. In independent dramas like The Favourite (Emma Stone’s last star vehicle) we’re allowed to see queer character who are weird, unpleasant and complicated. This has been true for decades. But Disney’s offerings are shaped by corporate constraints. Characters like Artie continue to get a lot of publicity thanks to Disney’s dominance over Western pop culture, but as always, you’re not going to find satisfying queer representation in a film like Cruella.