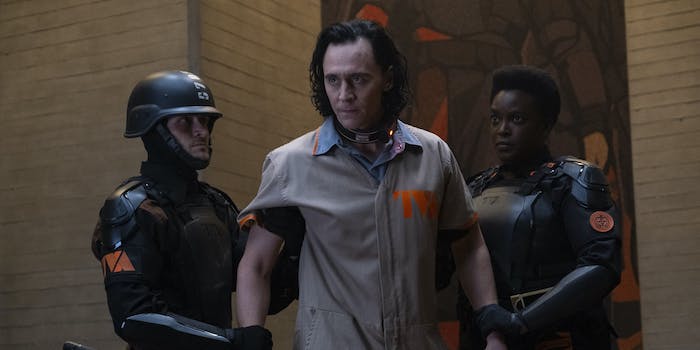 Review: Marvel’s ‘Loki’ is an excellent showcase for Tom Hiddleston—but other elements are a letdown

In a franchise full of mediocre villains, Tom Hiddleston’s Loki remains a standout star. Entertaining? Undoubtedly. Stylish? Absolutely. Sympathetic and misunderstood? Sometimes, until he reveals his true nature as a duplicitous little snake. Selfish, deceitful and often played for laughs, he’s an incredibly versatile character. Hiddleston’s deep, purring voice and Shakespearean training also do wonders for Loki’s melodramatic speeches, flourishing in this new Disney+ miniseries. The rest of the show, however, is less impressive. Like The Falcon and the Winter Soldier, Loki takes far too long to get started. (This review is spoiler-free.)

RELEASE DATE: June 9, 2021
CREATOR: Michael Waldron
STREAMING: Disney+
The MCU’s most entertaining villain embarks on a time-hopping adventure in this new spinoff series, co-starring Owen Wilson as a time agent. But while Tom Hiddleston is as charismatic as ever, the show’s writing is rather slow-paced and lackluster overall.

Spinning off from the time-travel antics of Avengers: Endgame, we’re reintroduced to Loki circa 2012, following his defeat in The Avengers. This was before he received the character development of the latter two Thor movies, making him a less lighthearted figure than you may recall. Thanks to this timing, the show must grapple with Joss Whedon’s characterization of Loki as as a wannabe authoritarian dictator, something that never really gelled with his chaotic prankster personality. (According to a popular fan theory and a blurb on Marvel’s website, Loki was actually mind-controlled by Thanos to attack Earth. But this hasn’t been confirmed in MCU canon.)

Spearheaded by screenwriter Michael Waldron (Rick and Morty), Loki begins with our title character getting arrested by the TVA (Time Variance Authority), a secret organization of time cops. Governed by enigmatic gods known as the Time-Keepers, the TVA eliminates any “variants” that break away from the “sacred timeline”—an allegory, perhaps, for keeping Marvel canon on the straight and narrow. After fleeing the Avengers with the Tesseract in hand, this version of Loki became a variant that should be erased. But one TVA agent (Mobius, played by Owen Wilson) suggests another option: Loki might be useful as a kind of expert consultant.

You may notice a distinct aura of procedural crime drama in this conceit. Director Kate Herron described Mobius as a hard-boiled detective, although he honestly feels more like a new Agent Coulson. A middle-aged bureaucrat who is loyal to his job, but has a subtle sense of humor and a rebellious streak. The other main TVA characters are Gugu Mbatha-Raw as Mobius’s boss and Wunmi Mosaku as a tough field agent who thinks Loki should be eliminated ASAP. I couldn’t help but notice a familiar crime drama formula here as well. The show casts two Black women in positions of authority, but their job is to scold and/or apply The Rules to Loki and Mobius, a pair of white guys who actually get to have fun.

Longtime Loki fans will find a lot to enjoy here. Hiddleston never disappoints, equally willing to deliver humiliating pratfalls and moments of real pathos. Regrettably, the show weighs him down with ungainly exposition in episode 1, over-explaining the concept of branching timelines and rehashing details from Loki’s MCU backstory. The whole thing would benefit from snappier editing and a heavier dash of humor, instead of lingering for an hour on scene-setting.

In line with the choice to put Loki in a crime drama, I have some doubts about the idea of Mobius psychoanalyzing Loki’s motives. The script isn’t smart enough to support a Hannibal-style dynamic, especially since Mobius just isn’t very compelling. To be honest, none of the supporting characters are that interesting, although the TVA’s retro-futuristic production design goes a long way to pull things together. Visual worldbuilding is not the MCU’s forte, and the TVA’s mid-century aesthetic sets it apart from the dull greys of Earth’s government agencies.

The show’s overall conceit (no spoilers!) is intriguing and will involve Loki time-hopping through various eras of history. Hopefully, they’ll take some cues from Doctor Who, a faster-paced show that does a more elegant job of explaining its worldbuilding. At any rate, the first two episodes suggest that Loki‘s creative team have a promising handle on their main character, even if other elements are a little second-rate.

Loki is neither a fully-fledged villain, nor someone who requires a redemption arc. He exists outside the moral framework of stories like Black Panther or Captain America, governed instead by the law of comeuppance: If he’s acting like a jackass, then he deserves to get slapped down. But if he’s acting like a jackass in an entertaining way, toward someone who deserves their own comeuppance, then it’s fine. This was the joy of the Loki/Grandmaster dynamic in Thor: Ragnarok, and indeed the rivalry between Loki and Thor. Motivated entirely by self-interest, all Loki needs is a narrative foil, which this show provides in a pleasingly unexpected way.

After WandaVision‘s lackluster ending and The Falcon and the Winter Soldier‘s muddled storytelling, we’ve hopefully learned to manage our expectations for Marvel’s Disney+ shows. Big stars and big budgets are the main draw, along with a meaningful connection to MCU canon. So while Loki isn’t as well-executed as the high points of the Thor franchise, it successfully fits the mold of a standalone spinoff comic. The idea of a variant timeline will allow the show to get weird, hinting at the familiar DC/Marvel concept of a multiverse where anything is possible.