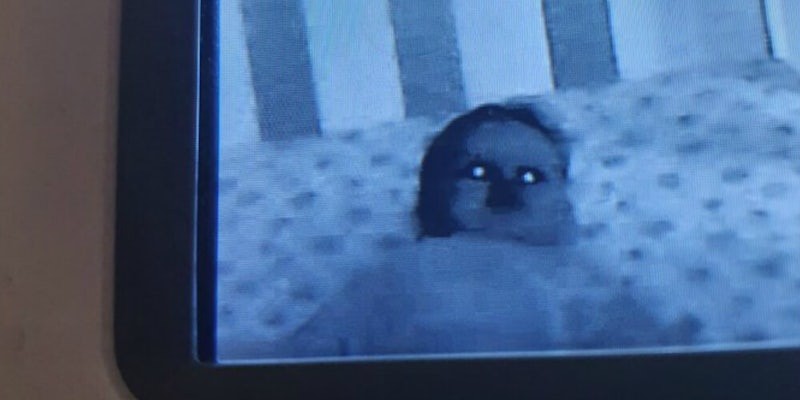 'We got a new video baby monitor and I think that was a mistake.'

Every horror buff thinks they’d be able to recognize the signs if someone they love was possessed by an evil spirit hellbent on bringing chaos and destruction down in some evil underworld plot. But what about if the loved one was a tiny, possessed demon baby with an unformed personality and no solid metrics by which to judge that they were acting unusual?

Well, you’d just have to rely on the old school signs, like glowing, demonic eyes.

That’s what Twitter user @PassionPopSoc found when she looked in on her little kiddo on the baby monitor the family had recently acquired.

“We got a new video baby monitor and I think that was a mistake,” she tweeted, alongside a photo that is definitely going to stir up some questions when the kid is looking through his photo albums in the future.

The cursed image quickly went viral, as cursed images trying to infect the masses with their manipulative and evil ways often do. People responded with everything, from helpful suggestions to raw terror.

“You know what they say, the camera adds ten demons,” one quipped.

Congratulations on your bundle of demonic energy

Baby's first demonic possession. And you would've missed it otherwise

to be fair the monitor would probably be fine if your baby weren't haunted.

You know what they say, the camera adds ten demons.

Others were quick to share their own photos of potentially possessed offspring, though none are quite as spine-tingling as little Chucky lying prone in his crib.

My wife is in a group of Mums and one of them was convinced they had a ghost in their baby's cot.

Turns out, the kid's dad had forgotten to put on the mattress protector… pic.twitter.com/nbIqngF8kF

Of course, 99% of people responding to the tweets are just joking around, and the mom with baby monitor regrets is all too happy to play along.

“On a related note, does anyone have experience with a good noise generator app? Every one that I’ve tried so far is just layers of whispered chanting in Latin instead of white noise. It still puts Finn to sleep but I don’t like it,” she later tweeted.

We’ve all gotten a good laugh out of demon baby, but if in 17-ish years a glowy-eyed young adult commands legions to enslave the souls of the world, we may spend our final seconds rueing the day we ever set eyes upon these images and laughed.