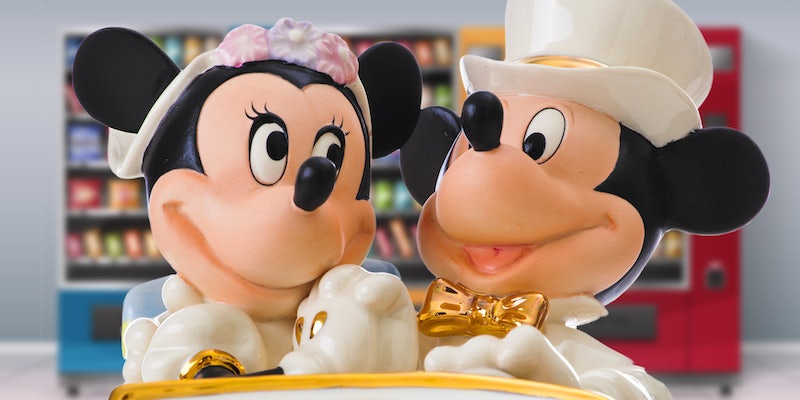 The poster said that getting Mickey and Minnie cost nearly as much as their allotted catering budget.

Weddings are full of choices that will, no matter how much thought is put into it ahead of time, be immediately scrutinized; some of it is rightly earned while others are more a matter of taste. But one couple’s apparent choice of wedding guests—and what they nixed in favor of getting those guests to the wedding—has collectively sparked the wrath of the internet.

A couple of days ago, redditor throwaway_family9525 posted about her recent wedding on r/AmITheAsshole. Although the ceremony itself went off without a hitch (and their parents helped pay for much of the ceremony), several of her guests, including her aunt, were now trash-talking the wedding because the bride and groom didn’t serve food at the reception. That part was true, the woman acknowledged, but that’s because she opted to host Mickey and Minnie Mouse instead—and that costs money. (According to throwaway_family9525, having both characters appear costed $2,750 per 30-minute session, and Mickey and Minnie were hired on two separate days.) The parents were supportive, but not everyone else was.

“The issue with our decision to not offer catering services/bar services at our wedding due to routing the money towards having a wedding Minnie and Mickey make appearances at our special day,” she wrote. “The cost to have both Minnie and Mickey for a good chunk of time (30 minutes) was almost exactly what our parents allotted for our catering budget, so we scheduled an appearance during our first dance and our wedding photos, forgoing served food (though there were PLENTY of facilities at the venue where people could eat….).”

In updates, the poster added that the wedding invitation mentioned that food was available at the wedding venue—even if the invite didn’t break it down on a granular level—and that “there were also vending machines available throughout.”

The post has plenty of markers of something designed to piss off as many people as possible. It features hosts being rude to guests, a major faux pas of not offering something that most people would assume is a given, and includes the additional detail of the person behind the post and her now-husband being Disney Adults, a kind of Disney fan who people often find very easy to hate on. And while the original post was taken down by AITA’s moderators, people took to mocking the original poster while answering the question that yes, she and her husband were the assholes.

“Never got the adult Disney obsession, but whatever,” @Scientits wrote. “But blowing the catering budget for your wedding on a 30 minute appearance by Mickey and Minnie and then not providing food or drink for your guests is just 😳”

People even found a way to loop in the recent discourse over Swedish people not offering house guests meals to poke fun at the scenario.

Like with most posts that originate on r/AmITheAsshole, the story is to be taken with a grain of salt. But if there’s anything to take away from different parts of the internet uniting against one entity, it’s that food at the reception might be non-negotiable lest anyone wants to incur anger from many of the guests who’ve gathered to celebrate them.