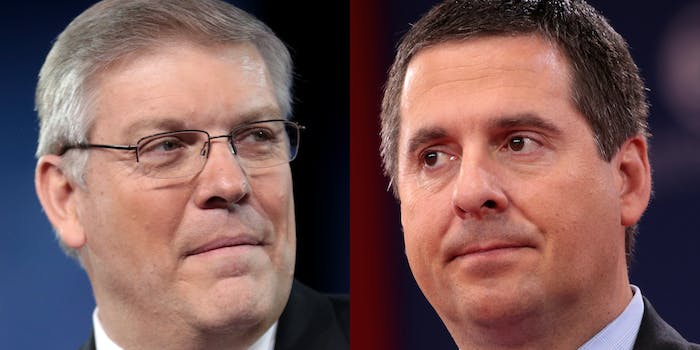 Loudermilk helped get Italygate in front of Devin Nunes.

The theory falsely states that an Italian defense contractor helped shift votes in the 2020 election, swinging it from former President Donald Trump to Biden.

The Washington Post and several other news outlets reported on the conference call last year, but the Daily Dot is the first to reveal Loudermilk’s involvement. Loudermilk, it appears, was instrumental in moving the conspiracy up the chain in the Republican party. Zack herself claims to have told Trump about it at Mar-a-Lago in December 2020.

The phone call, which took place on Jan. 4, 2021, is a conspiratorial classic, an almost hour-long discussion of satellites and computers in Pescara, Italy. It also includes one of Zack’s supporters praying to Jesus for a private plane.

During the call, Zack explains that “Barry [Loudermilk] … actually was a blessing in getting me to Devin Nunes … he called Devin for me … and that helped a little bit.” She continued by saying “They’re all still waiting for, ‘quote-unquote,’ the proof.”

That same day, Nunes was awarded the Presidential Medal of Freedom by Trump. Nunes became infamous for his close ties to Trump while in Congress, doing his best to thwart investigations into the president’s ties to Russia.

Both Loudermilk and Nunes voted against certifying the results of the 2020 election in favor of Biden.

Later during the call, an unidentified man named David says that “Rob Adkerson is Barry Loudermilk’s chief of staff…I can ask Rob if Barry’s going to be on Air Force One,” referring to a scheduled rally for Republican Sens. David Perdue and Kelly Loeffler in Georgia later that night.

In another interview recorded on Jan. 6, 2021, with the online talk show “America, Can We Talk?” hosted by Debbie Georgatos, Zack said that she “sent [the Italygate document] over to Devin Nunes’ staff … whom I’ve been speaking with for some time.”

Georgatos was also on the Jan. 4 phone call.

The Daily Dot reported last month that Loudermilk told WBHF radio on Jan. 6, 2021, “about a dozen” people were present with him prior to the insurrection—after having initially obfuscated about his visitors the day before the Capitol riot.

The Daily Dot also reported how Zack told host Georgatos that she delivered a false Italygate “affidavit” to Loudermilk and Nunes.

Loudermilk, who has been asked by the January 6th Committee for testimony, revised his story of the lead-up to Jan. 6 numerous times. In a joint statement with the House Administration Committee, he first said, “there were no tours, no large groups, no one with MAGA hats on.” Loudermilk later said he met with “a constituent family meeting with their member of Congress.” That was subsequently revised again, in a video statement Loudermilk released, calling it “a constituent family and their guests” that he admitted were wearing red hats.

It’s unclear whether Nunes’ staff forwarded him the Italygate affidavit.

Loudermilk, Zack, Nunes, and Adkerson did not respond to requests for comment.