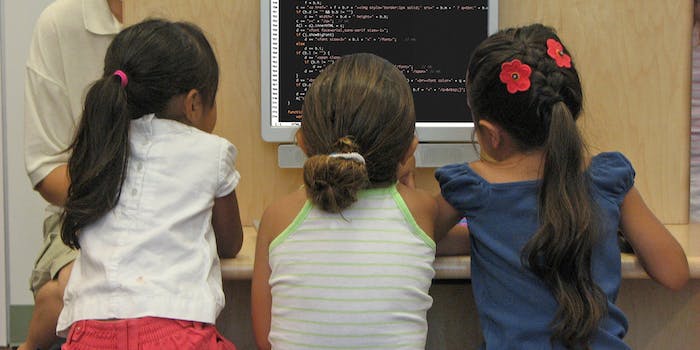 How coding in schools can close tech’s gender gap

The discussion is over: Coding and programming are essential skills for the kids to learn.

The discussion is over: Coding and programming are essential skills for the kids to learn, as necessary as operating a motor vehicle or knowing how to write. As the world economy consistently shifts toward the automation and digitization of every job—not to mention the ever-growing economy of apps and software—it is abundantly clear to all but the most resolute Luddite that, to be prepared for every industry, kids must code.

What’s not so clear, however, is how the coding revolution can be as inclusive as it needs to be. Currently, nine out of 10 public schools in the U.S. lack a computer science class (typing games and playing Oregon Trail don’t count). Most of the headline-grabbing summer camps and community classes that focus on coding have been led by nonprofits like Code.org and Codecadamy, meaning the vast majority of kids will remain unexposed to these vital skills.

Girls especially are left to the wayside when it comes to teaching computer science. Of those students who advance to the AP Computer Science level—the highest offered by schools that are lucky enough to offer CS classes at all—only 17 percent are girls. While these same girls will go on to earn more Bachelor’s degrees than men, only 12 percent of them will seek out a field in the computer sciences.

There’s a decades-old plague of inequality that is constantly reflected in the technology industry as a whole. Sexual discrimination scandals at rising companies like Tinder and Snapchat reflect upon a boys’ club culture more befitting the halls of Sterling Cooper. Giants like Google and Facebook are more frequently becoming aware of the gender disparity in their workplaces, with both having created summer camps in the Bay Area specifically to generate an interest among young women in being an engineer.

The tech sector wants to be diverse, but the solution must change an entire generation. In a study by the Department of Labor, computer science and technology are expected to create 1.8 million jobs by 2020, but the U.S. workforce will only be able to fill 29 percent of them with qualified candidates. Women make an overwhelming 85 percent of all consumer purchases, yet represent only a third or less of employees at major tech firms. If we take for granted that young men feel sufficiently comfortable pursuing work in IT, then the solution must be to draft often and draft early from the other half.

These well-funded camps, however, will not be enough. In much the same way we consider reading comprehension and mathematics crucial skills for modern life, our society as a whole must endow every child with the abilities to work with technology through the public school system—and we need it done yesterday.

In September, U.K. schools will begin mandatory CS classes for all grades. Asian countries like China, Vietnam, and Japan are lightyears ahead of the West when it comes to teaching coding in public schools, and the gender gap in their tech sectors is minuscule compared to that of the U.S.

We need to arm our girls—all our children, really—with the tools necessary to compete in a global market, or our economy as a whole will suffer the consequences. It’s a household fact that the U.S. is regularly outperformed in the math and science by BRIC countries (that is, Brazil, Russia, India, and China) every year. It is an imperative with few rivals of importance that, for the sake of the future of our country, we expand our children’s knowledge base not just so they can succeed in the future but to keep us on pace in the present.

One of the common arguments against the wave of technology in the workforce is implementing new technologies usually requires the retraining of workers. To make the problem worse, workplace technologies are now changing so quickly it can often appear impossible for workers to keep up.

Consider the massive retained use of Windows XP in the workplace, despite Microsoft ceasing updates for the OS back in March. But before many employers have a chance to switch over to Windows 7, Microsoft announced this month they’ll be ending support for that popular OS by the end of the year.

At this point, even if the U.S. were to implement nationwide coding class standards in all public schools, we’d still be playing catch-up with both our international competitors and the pace of technology itself. And as is usually the case, the gender gap both in education and at the professional level makes this effect worse for girls. When the American technology sector gets a cold, girls in tech get a flu.

But sustained computer science classes at all levels of school—yes, you can teach 5-year-olds to code—need to be a top priority for our nation’s educators and leaders if the situation is to ever get better, and public schools are the best method to ensure universality and total equality.