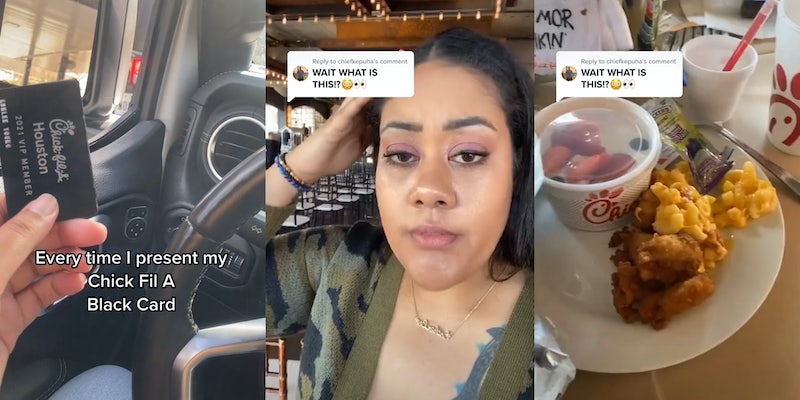 ‘What does it feel like being God’s favorite‘: TikToker explains how to get Chick-fil-A black card in viral TikTok

The card gets her one free meal a day.

A club so exclusive many don’t know it exists is going viral on TikTok. And it’s all run by Chick-fil-A.

One TikTok creator is sharing a behind-the-scenes look at what it’s like to be a Chick-fil-A black card holder, and people are freaking over the benefits.

In one video to the trending sound, “it must be nice,” user Ashlee (@ashleeonair) reveals the black card. It says her city, “Houston,” along with 2021 VIP Member.

She explains in the comments that the card gets her “one free meal per day.”

But that’s not the only perk.

In another TikTok, which has been viewed over 345,000 times since being posted on Dec. 29, Ashlee explains how to get one of these VIP cards. She says Chick-fil-A invites local influencers, athletes, TV personalities, and radio stars to a party every year. Ashlee herself is a radio host.

That’s where they hand out the cards, eat, and “dance with the cows.”

People in her comments section are stunned this even exists.

“What does it feel like being God’s favorite,” one person asked.

“Lord I have seen what you have done for others,” another added.

I would literally go every day,” a third commented, to which Ashlee responded: “Oh I do! But after trying everything once, you gotta take a break lol.”

Someone did ask in the comments section if the VIP card gets Ashlee out of waiting in the long lines, and unfortunately, it doesn’t.

“Def still got to wait in line,” Ashlee responded.