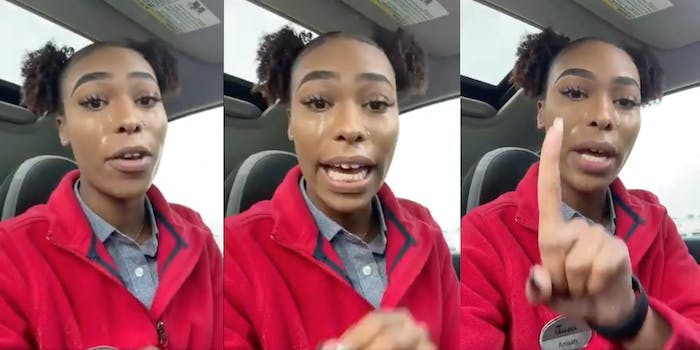 ‘He just tried to fire me’: Chick-fil-A review-bombed after Black worker says it dismissed her complaint of being ‘inappropriately touched’ in viral video

'The problem is I’m a Black woman, and I vocalize my issues.'

A Chick-fil-A location is getting review-bombed after one of its now-former workers seemingly accused its management of racism and of dismissing her concerns after she complained about getting “touched inappropriately” while on the clock.

“There was a man who touched me inappropriately. I tried to go somewhere else,” she says in the video, though it is unclear whom she is referring to. The worker is in full uniform and crying in the video, suggesting she recorded it in the immediate aftermath of the incident.

The worker says she was told to speak with the “operator” of the location. “He just tried to fire me for calmly vocalizing how I felt,” she says of the operator, a term Chick-fil-A uses to refer to the employees who run its locations.

She says the operator’s wife also works at the location and that “they both have made it very clear they don’t like me.”

She says that when she told the operator she “wanted to talk to him,” he said, “Yeah, before it’s too late.”

“In the middle of me talking, he said, ‘Are you done? ‘Cause you have done nothing but criticize. How long have you worked for Chick-fil-A? You’re bringing down the employees who have been here for 20 years. You’ve done nothing but walk in here with an attitude,” she recalls him saying to her.

“I think the problem is … I’m a Black woman, and I vocalize my issues,” she says.

She then addresses Chick-fil-A’s reputation of having friendly workers and a positive working environment. “If anybody thinks Chick-fil-A is the best company, I just say, do not work at this one,” she concludes her video.

The video, captioned “i worked at Chick fila and today I quit. here is a summary as to why,” has been viewed more than 6 million times since being posted on May 13.

Despite the seriousness of the video and its accusations, social media users can’t help but find humor in the Google reviews being levied against the location.

“If y’all have not seen this video on Twitter, please go like and retweet it. … I really feel bad for her, and I hope she’s going to get another job, and I hope Chick-fil-A resolves this (issue), but the reviews on the Chick-fil-A,” one user says in a viral TikTok video about the incident before laughing and reading aloud some of the reviews.

“They called me a dirty monkey at the drive-thru and spit into my bag right in front of me,” one of the reviews reads.

Other reviewers are accusing the operator in question of everything, from “peeing” in their lemonade instead of refilling it and putting them in a chokehold to super slamming them “across the entrance.” “I came here to pick up my food and instead was picked up by the ambulance,” part of another review reads.

On May 14, the worker urged supporters of hers to “please refrain from sending threats towards anyone involved.”

“I do not condone or associate with that kind of behavior. just wanted to spread awareness,” she tweeted.

The Daily Dot has reached out to @anisahkyera and Chick-fil-A.