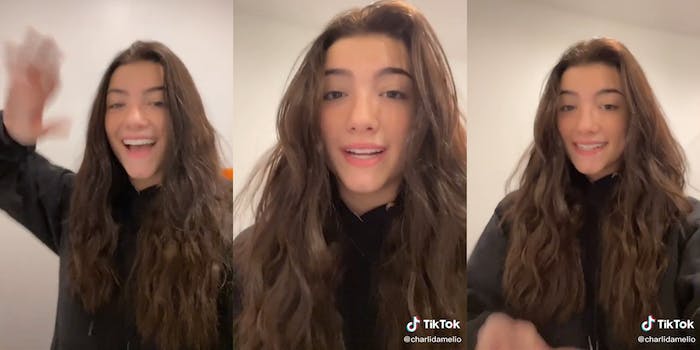 Amid chef controversy, Charli D’Amelio hits 100 million followers after all

The teen rose to fame after creating her first video 18 months ago.

Over the weekend, TikTok star Charli D’Amelio hit a major milestone: She became the first user on the app to reach 100 million followers.

In a TikTok video on Sunday, the 16-year-old thanked her fans. “I still feel like it’s a dream, kind of waiting to wake up,” she said. Charli shared her first TikTok video in May 2019.

In honor of the milestone, TikTok announced that it was donating $100,000 to American Dance Movement, which it is calling the Charli D’Amelio Dance Grant. Charli, of course, became popular on the app in part due to her viral dances.

But her rise to the coveted 100 million follower count was not without controversy. Just last week, Charli reportedly lost thousands of followers after an awkward family dinner with YouTuber James Charles in which she joked about… not getting to 100 million followers yet. The hiccup didn’t affect her for long, though. She hit her goal on Sunday morning.

This time last year, Charli was a rising star with 10 million followers. As the Daily Dot’s Audra Schroeder wrote in an article in December 2019, Charli “rose to popularity for videos that are simple and somewhat cringey, but that’s been the baseline for a while: Everyday people, some with very few followers, creating content and sending it out into the void. Some of it is bad; some of it is inspired.”

Charli’s videos were not that different from what other users were sharing on the app, but her personality and willingness to engage with others on issues that matter to them gained her a massive following. In May, the teen posted a video that directly addressed George Floyd’s death and the Black Lives Matter movement. “As a person who has been given the platform to be an influencer, I’ve realized that with that title, I have a job to inform people on the racial inequalities in the world right now,” she said in the video. It was one of her most popular videos; it has more than 136 million views. Charli’s avatar is currently a black circle with Black Lives Matter text.